1. That Crappy McShitass stated of mind that I was dealing with a while back seems to have lifted over the last few weeks. I can't point to any one thing in particularly that sent that wicked little storm cloud on its way, but such is the way with these things sometimes. The way out is usually through.

2. Professor Simon's teaching lessons on cause and effect. Observe: 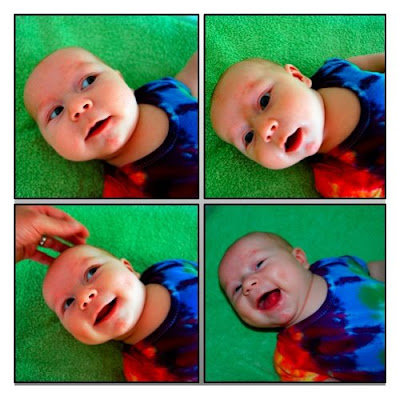 That's right, tickle the fuzzhead (cause), you get a smile (effect).

3. Those of you who keep up with my wife's blog, or who know us in the flesh know that a while back, we were worried that Henry might have lead poisoning. Fucking lead poisoning! What year is this again? Long story short, the kid was showing all the signs, none of which had been apparent prior to us moving into this house we're in, which was built in 1946, lead paint's American heyday. Well, I'm pleased to announce that the results are in and my little boy is just fine. There may be lead in the walls, perhaps a bit in the soil, and maybe even some in my pencil, but none of it seems to have gotten into Henry's bloodstream. Beyond that, both his appetite and his energy level seem to have returned with a vengeance. Of course, now I have all this useless information that I culled from the Texas Property Code just rolling around in my head, looking to be put to use.

4. People keep asking me about how school is going, and I'm starting to feel a bit like a broken record telling them that I took this semester off because of the new baby. I know I'm going back in the fall, but that seems so very far away. Not just timewise, but also because, faithwise, I'm in an odd place. But that's fodder for another post. Still, there's some exceedingly good news on the school front. This little jolt of joy is one that I've been sitting on for a while because I just knew that if I made any sort of announcement about it, it would somehow fall through. I didn't dare say anything before it was absolutely 100% certain, so certain was I of my power to enjinxanate the situation. But we've hit the 100% mark now, so I can tell you. See, my employer has this cool little benefit called tuition assistance where they'll reimburse you the cost of your tuition for any higher learnings you may wish to pursue. There are some strings attached, but they're quite reasonable strings, not like those slightly psychotic strings that like to play mind games. Except the thing is, when I started at the seminary, the company didn't want to approve my request for reasons I never could quite get to the bottom of. Fine. I went ahead with my plans and got through two semesters. Then one morning, I happened to be having a friendly conversation with our company HR guy, and the subject of school comes up. Being the HR guy, he asks if I'm taking advantage of the tuition benefits, to which I respond with my sob story. "Let me see what I can do" he says. Barely an hour later, I get a call back from the benefits department saying they've approved my request. I got all my paperwork in and the check came through.

Email ThisBlogThis!Share to TwitterShare to FacebookShare to Pinterest
Labels: news of the good nature, seminary, those melancholy feelings

Between kid's birthday parties featuring egg hunts, egg hunts coupled with feasts, feasts accompanied by bottles of wine, visits from one grandmother while taking care of the other grandmother's dog, it was one of those weekends that managed to be extremely full and yet somehow still low stress. Whenever weekends are full, I tend to complain about not having any downtime, whereas when weekends are completely unscheduled, I complain that we never do anything. I'm just impossible to please.

Saturday morning found us at the party for the second birthday for Henry's friend Stella. It's a lot of fun having friends whose kids are around the same age as our own. Indeed, watching toddlers interact is one of the true joys of being alive. 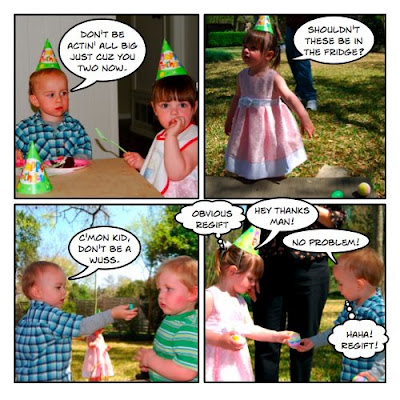 Seeing as how it was bunny weekend and all, there was an egg hunt. 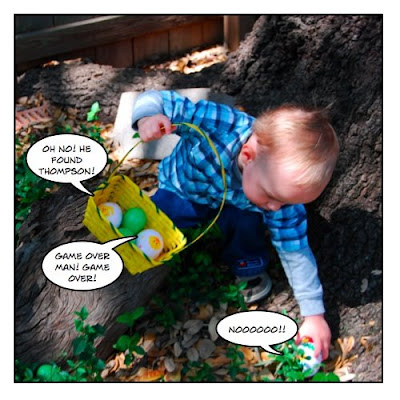 And as the party wound down, the goodbyes got a bit emotional. 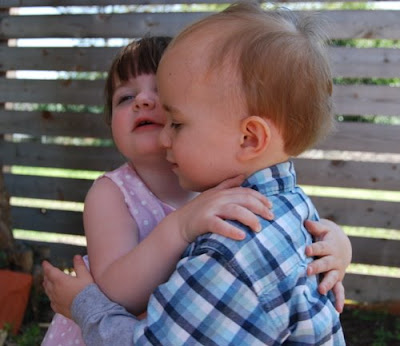 And that was just Saturday morning. That afternoon, the boyos got a visit from Grandma and Great Aunt Holmes. 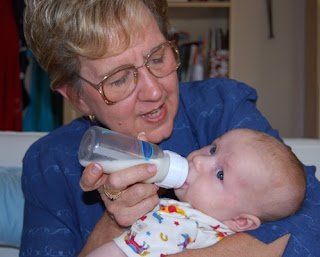 Can you tell my mom is in total baby heaven here? Yep, she is.

Sunday found us at not one, but two feasts, the first of which featured only the children brought by us. This meant that all those pesky eggs had to be handled by Henry and Henry alone. 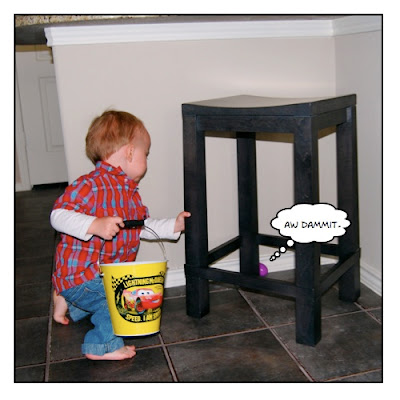 The second feast featured the same crowd of parents and children that had been at the previous day's birthday party, except that since it was evening instead of morning, and Easter instead of Stella's birthday, we were free to pop open the wine.
Posted by Unknown at 11:12 PM 4 comments:

If BushCo decides to invade the Island of Sodor 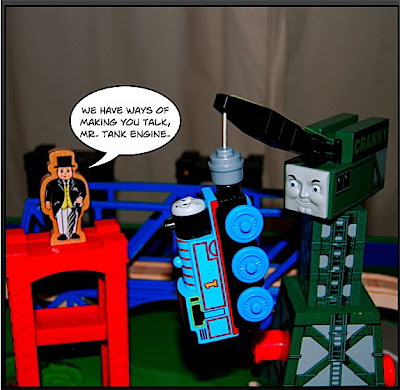 Email ThisBlogThis!Share to TwitterShare to FacebookShare to Pinterest
Labels: comic, funny but not really, politics, toys

Change is always bad all the time always

Looking at my archives today, I noticed that I've been blogging under The Holmes moniker for three years as of last Friday. Of course, I've been doing all sorts of other stuff as The Holmes for much longer, but most of that required little if any effort. But this blogging thing, this whole maintaining the will power to not shut down a free webpage and occasionally write stuff on it, now that takes work.

So after three years, I figure it's time to perhaps make some changes to the old layout. Gone are the black background and the title written in Olde English font. When I was younger, I thought it would be awesome to put "Holmes" in Olde English across the back window of my 94 Ford Taurus, but then I grew up a little and decided maybe that wasn't such a rockin' idea after all. So instead I tacked it to the top of my blog.

I can't say I'm super-pleased with the new layout, but it's a step. I'm glad to be rid of a lot of the widget bling. Some of it may return in time, though some I can say with certainty is gone for good. I made sure to get the blogroll back in there ASAP since I know how testy some of y'all can get. The new header may need some more work, but the picture comes from some graffiti that sprang up one day on a building near our old place. I, of course, was a suspect. As usual.

A new one for my collection

So tonight we were watching "Heroes" and, well, not to give anything away if you haven't watched it, but this one particular episode made me realize that if I were ever cast into a situation where I was unable to tell what day it was for an extended period of time, it would totally freak my shit out. If you were stuck with me in this situation, you'd probably end up trying to kill me just so you wouldn't have to keep listening to me try to work my way backwards to the last day that I was certain of. I'd probably become downright unbearable, mumbling shit like "yeah, so that means today is definitely Wednesday, August 13th...unless, wait, my last birthday was on a Tuesday, so that means..." See what I mean? And of course, I'd curse myself relentlessly for not having the foresight to keep better track of time in the first place.

I guess I can add that to my collection of irrational fears. Good thing too, all the old ones were getting stale.
Posted by Unknown at 11:17 PM 2 comments:

So our beloved Governor Rick Perry, he of the slick coif who carries on the tradition of sporting cowboy boots with designer suits, has gone and written himself a book about the overwhelming awesomeness that is the Boy Scouts of America. Kickass! As an Eagle Scout and former member and employee of the BSA myself, I could also write such a book, though I imagine my account would differ from the gov's a wee bit.

Governor Good-Ole-Boy recently granted an interview to the New York Times wherein they appear to have spent most of their time talking about the book and about scouting. Of course, the gov had to field a few questions about the BSA's no-gays-allowed policies, and I have to say, I found his answers rather interesting. It's not that his reasoning is so compelling because it's not; it's just that it sounds as if the scouts have abandoned the tactic of defending their policy by saying that it's intended to protect kids from child molesters, undoubtedly because that line of reasoning has been shot full of holes. So what's the new argument Rick? 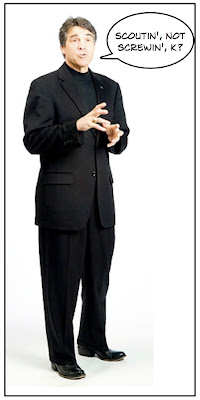 "Scouting ought to be about building character, not about sex. Period. Precious few parents enroll their boys in the Scouts to get a crash course in sexual orientation."

Ah, okay. So now it's not about protecting kids from predators, it's about protecting them from...well, from what exactly? From having to be anywhere near gay people? From information? Or rather, is it to protect parents from having to have their boys around homosexuals, where they might find out that they're, ya know, human beings?

Except the thing is, if scouting's not about sex, then why are the scouts making it about sex? Doesn't a ban that is based entirely on sexual orientation make the entire issue precisely, exactly about SEX?

Pictures to prove it

So we turned Henry loose with our old old digital camera. The results were nothing short of fucking art: 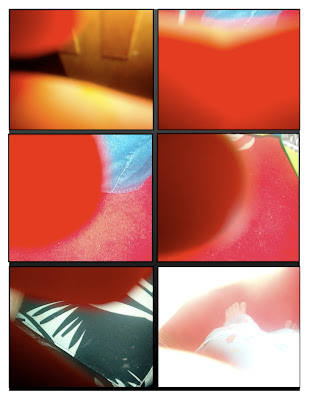 Note the deep reds of the fingers captured through the technique of placing them extremely close to the lens, obscuring most of the picture beyond, suggesting perhaps that as human beings, we are often unable to see beyond the blood in our own hands. Brilliant.

Of course, there were some rather frightening entries in his portfolio, like this one: 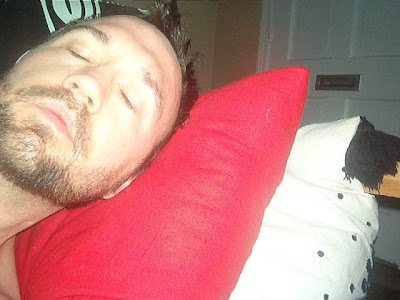 Perhaps the lumbering beast is dreaming of a letter that will come through that mailslot in the background. Such striking composition, and a bold move focusing on a subject so badly in need of a shave.

Little Simon AKA Turtle AKA Chubb isn't snapping any pictures yet, but he has learned what to do when the camera is turned on him: 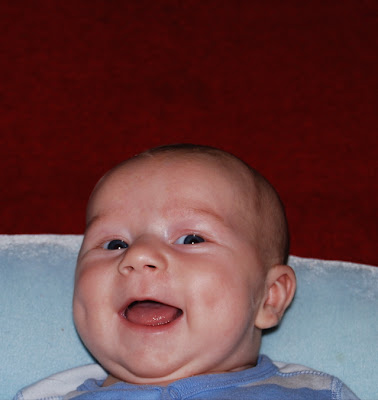