And Then One Day I Killed A Chicken

The little boy peered into the bucket. Above it, a chicken hung by its feet, bleeding out from the openings in its neck.

I had driven about an hour to be here, the last two miles of it unpaved, making only one wrong turn the whole way. I was greeted by a friendly woman named Joanne and a big black dog whose name I didn’t catch. With me, I’d brought a cooler with ice, some plastic freezer bags, and a cardboard box with holes cut in it to allow the chicken inside to get some air.

The place was Eden’s Cove Farm, a family-owned joint down in Cedar Creek, Texas, about an hour Southeast of Austin.

But folks weren’t here for bacchanalia. My wife and I have been raising chickens in our backyard for about a year now, and it’s mostly been a success. Yes, they made the backyard look like a dustbowl and we ended up replacing all our grass, but we also have more eggs than we know what to do with, and it gives us a way to show the boys that food, you know, comes from somewhere, not just the grocery store. And that was really as far as we ever thought we would take it.

Except we would occasionally titter around the subject - that’s right, I said titter - the subject of turning our birds into meat. Where does one learn such a skill? Would we even be able to do it? Personally, I’ve never had much doubt about the latter concern. The thought of actually doing it myself just never made me all that squeamish. Make of that what you will. But the how? That was a different mater. It doesn’t seem like the kind of thing you want to learn from a book or off the internet. Imagine trying to scroll down a webpage with your hands covered in chicken insides.

And that’s where the good people at Eden’s Cove came in. They offer these processing days where you can bring out your birds and they let you use their facilities, and if you’ve never done it before, they’ll teach you how.

Aside from the people that worked at the farm, I think just about everybody there was from Austin. Some were there just to use the equipment, others, like me, were there to learn, while some were there just to observe, to see if it looked like a task to which they might be up. And then, of course, some of them were kids whose parents dragged them along. Some of the kids seemed interested in the proceedings, others seemed more interested in following around the flock of turkeys that was hanging out nearby.

You’ll notice this post isn’t heavy on the pictures. I had intended to snap a few, but once they started in on the demo, it seemed like the kind of thing that I should pay real attention to rather than watching it through the screen of my phone. And then once I started in on my own bird, my hands got kinda gunky, and who needs gunk on their phone? The only pictures I snapped were of that dog that greeted me. 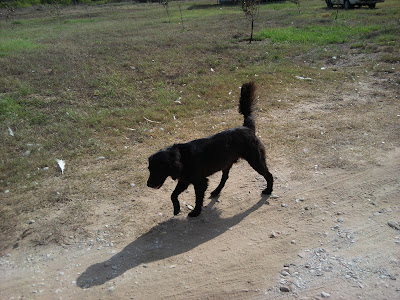 And this old rusty tractor that I passed by on the dirt road on the way to the farm that caught my eye. Look, see? This should provide you with a bit of what they call “a sense of place.” 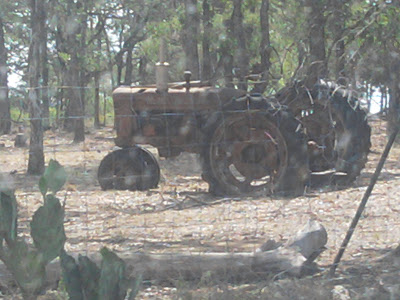 The processing area was covered by a roof and open on three sides. There was equipment storage in the back, a counter with a sink, and a series of tables. It was all immaculately clean. Off to one side, strung between two of the wooden support beams was a thick clothesline, from which hung several thin ropes with loops at their ends.

A guy named Kevin did the demo. He had long red hair pulled into a pony tail and looked like he could be an extra on Game of Thrones or the like. He started with a hen so massive, it reminds you that, yes, indeed, these squawking clucking creatures are descended from dinosaurs, and who are we to say they’ve forgotten their lineage? He put her legs in one of the loops and pulled it tight, then placed a bucket beneath her. Us cityfolk circled in close, kids up front, as he showed us where to make the cut, then proceeded to place knife to neck.

Kevin held her still while she shook through a few death throes. Once she settled, he did a couple more the same way, then took them all down and plunged them, one by one, into large pots of hot water to loosen up the feathers. Then it was time for the plucker. No, the plucker is not a person who sits in the corner pulling feathers and moaning “aw, why do I always gotta pluck the chickens?” It’s a big metal cylinder that’s lined on the inside with what can only be described as rubber fingers. You toss the birds in, flip a switch, and it swirls them around like a washing machine. A minute later, plucked birds come out. Efficiency.

“I got chicken blood on my finger!” It was the same kid from earlier. He was holding up his finger for me to see.

After observing a bit longer, I decided I was ready. I got my bird out of her traveling box. I put her feet through the loops of one of the lines and tightened it, at which point she stopped squawking and hung still. Most of the birds did that. Kevin showed me one more time where to make the cut...and then I did.

I only got a drop or two of blood on my hands, just enough to bring some Macbeth jokes to mind, though I kept them to myself. The bird’s flapping lasted a few seconds before she settled and I took her down. Water, plucker, then over to the processing table where Joanne walked me through it. No need to go into the details, but to sum it up, it’s basically, “cut here and here, reach in, pull this stuff out, don’t break that green thing.”

“Those are lungs. Good job.”

While I was pulling out the guts, I noticed something that looked egg yolk mixed in. I felt around and, sure enough, there was an egg, along with a couple of yolks that were going to be eggs. Giving right up until the end.

Following the removal of the legs and a bit of clean-up, I bagged up the bird and put her on ice. I cleaned up my utensils and my work area and washed up. I was done.

That wasn’t so hard.

And it really wasn’t, which is one of the things that struck me most, that when it was all said and done, the whole experience both was and wasn’t that big of a deal. On the one hand, the process was pretty simple and straightforward, I didn’t have a problem with any of it, and I would definitely do it again. On the other hand, I took a being’s life, and even if that being was just a chicken, such a thing should not be taken lightly. Of course, I’ve done just that millions of times over the course of my life, horking down food with barely a thought to where it came from and all the things that had to happen for it to reach me. Putting myself right there at the start of the process and doing the work on my own made it impossible to do that.

The Berserker Squirrel Rap Which Was Requested Via Social Media Commentary

First, there was this:

Which was followed by this:

Which brings us to this:

Other night, bedtime for the shorties
I’m in my boy’s room reading up some stories.
Sitting on the bed with the Spiderman steelo.
With a libro ‘bout wizarding heroes
When my wife runs in with a scream and a shout
Babbling something about rodents falling down from the clouds
“What’s up, lady? We’re tryna read Harry P here”
But she was trembling all kinds of afeared
“It came from the sky! A squirrel on the attack!”
“Where was it?” I asked, she said “Out in the back!”
“It plopped just a few feet away on the deck
Now it’s twitching all over like it’s almost dead.
You gotta go out there, put it out of its misery”
I’m all, “I gotta kill a squirrel? Are you seriously?
Fine, just don’t let the boys be spectators.
They don’t need to see Daddy doin’ squirrel euthanasia.”
Stepped out the back door and sure as hell
It was like somebody’d hooked a car battery to his tail.
Picked up a shovel feelin’ murder in my veins
Said, “I don’t wanna do this, but it looks like you’re in pain.
I’m sorry, furry friend, this sucks for us both.”
I stepped to him, ready to make a ghost.
Gave him a poke, and oh! What a relief!
That squirrel stopped twitching and jumped to his feet.
He ran across the yard and bolted up a tree.
In two seconds flat, he’d departed the scene.
No blood on my hands, nope, not today.
No murder for me. I call that a good day.
Posted by Unknown at 10:59 PM 3 comments: