The street we live on is a pedestrian route for many of the neighborhood hooligans walking to and from the local middle school, which explains why I found this bit of evidence of justice ill-served floating around the front yard. Note the student comments at the bottom: 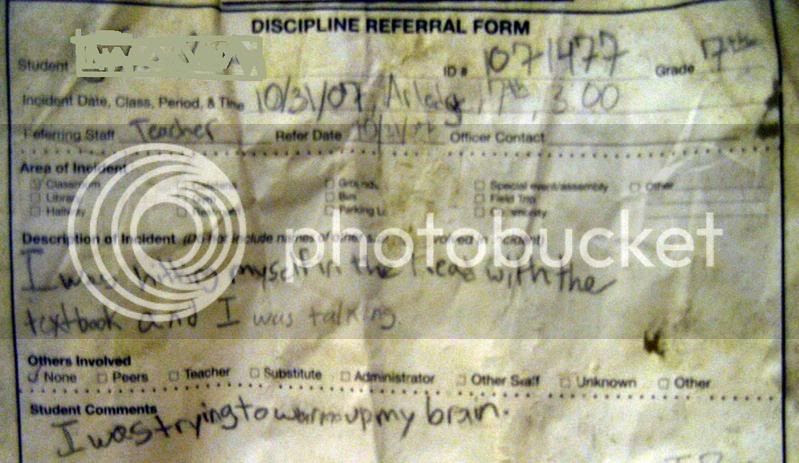 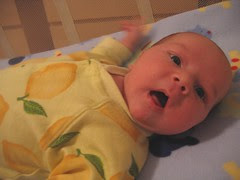 Littlest dude is just under a month and 11.5 pounds. The way he's gaining the poundage, he'll be asking to borrow my clothes in a couple of weeks.

This morning I woke up, as I have many recent mornings, to the sound of Henry calling to me over the baby monitor. I went into his room, picked him up, along with his favorite blanket and his stuffed animals, and brought him back into our bed to snooze off the rest of the morning. It used to be only one stuffed animal, a nice little Elmo doll that, God bless it, doesn't sing or dance or say a single solitary thing. Sidenote: It's shocking how hard it is to find a quiet Elmo, they all seem to have shit to say. As I was saying, Elmo now has a friend, a bear, who is also as silent as a made man under interrogation. Who knows how many of Henry's stuffed little friends I'll have to carry with me in another month. This is developing into something of a ritual, one which I won't complain about too much since it typically affords about another hour in the sack. 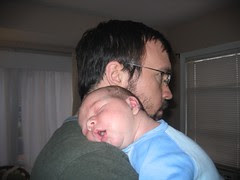 The Ash drove me to work this morning so that she could have the car for the day. Something about going places, doing things, running things over, or some such. It is astounding how long it takes to get two little people ready to go anywhere, even if one of them is immobile. I can only imagine what it will be like when they can both run off and hide.

After work, the whole family arrived to rescue me. Driving along, Ash was telling me about her day, and she mentioned something about "the boys." I laughed and pointed out how our life was now such that we would be referring to "the boys" regularly in sentences. The boys this, the boys that, the boys, the boys, the boys. Little things are awesome sometimes. 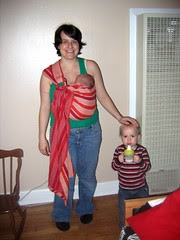 We stopped by the store on the way home to pick up some stuff for dinner, Ash and Simon waited in the car while Henry and I went inside. We've been trying to do little things like that to reenforce Henry's big bro status and remind him of all the cool stuff he can do that the baby can't just yet. I'm getting the feeling that Henry's looking forward to the day that Simon gets his legs under him.

On the way home from the store, we passed by some kid who was running around with a toy lightsaber, which inspired the following bit of "Return of the Jedi" chit-chat.

HOLMES: Hey, that kid's practicing to be a Jedi.

Strong in the force is this one. 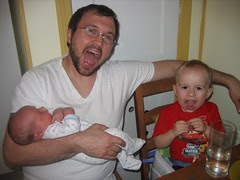 Good morning, time to get up and go to work

So after a much too brief leave of absence, I returned to work the last half of this week. To say that I was super-excited to be back at the grind would be a great big stinker of a lie. Being OOTO (that's "Out Of The Office" for you non-office types, not "Off Over The Ozarks" like you were thinking) for so long caused me to get used to spending my days engaged in a variety of simple yet satisfying activities, things like playing outside with Henry, enjoying the cooing and gurgling that can emanate only from a newborn, blatantly ogling my wife, not shaving, practicing my juggling. It's a good life. Oh, and I conducted an experiment to test the depths of Simon's stay-asleep-itude, inspired by my amazement at the sight of a newborn baby who actually likes to sleep. Henry took a staunch anti-sleep stance in his first months on this planet, so much so that we couldn't even lay him down without him letting loose with a blast of screams. We actually managed to bottle some of those screams and sent them off to a lab where a team of mathematicians, linguists, and anthropologists translated them into English for us, so now we know that all that screaming was just Henry's way of asking, "GOD, WHY DO I HAVE SUCH SHITTY PARENTS?!" But lo these two years and some change later, the great Simon experiment of 2008 boldly asks the question, "Will he, in fact, stay asleep while his father hammers nails into a wall in the very same room?" Turns out, yeah, he will...I got a whole wall full of pictures hung, and not a single baby dream was disturbed.

But it was back to work for me this week, so that kind of fun has to be relegated back to evenings, weekends, and the occasional day worked from home. I was so not eager to be back that I halfway snapped at the first person who started with the litany of baby questions. Not that I don't love talking about my kids, it's just that it was 8:00 and I was NOT in my pajamas. That can be hard on a sensitive soul like me. So I spent the last couple of days repeatedly answering The Series of Standard New Baby Questions, which was pretty cool. I'm pretty happy to ramble about my kids given half a chance. Plus I grew a beard while I was out, so I had a lot of people point out to me that I had a beard. "Holy crap dude, you got a beard! And it's growing RIGHT OUT OF YOUR FACE!"

The human animal's powers of observation never cease to awe and inspire.
Posted by Unknown at 8:05 PM 7 comments:

Could you kids just go to sleep so I can blog about you?

I've been finding it rather amusing all of the little details regarding newborns that I seem to have forgotten since Henry's infant days, just a little over two years ago. Like that whole thing where they'll just pee on your during diaper changes - that's a lesson you'd think would stick for good, but no. Simon had to drop a little refresher for me on that one. It was good of him to get that over with quickly.

And there's that neat trick where you can set them down someplace and turn your back for two seconds and they'll still be exactly where you left them when you come back. Yeah, toddlers don't do that one. Only newborns. And perhaps seniors. I like that one, although it's slightly compromised if you've got a toddler around who is very interested in his baby bro.

Not to mention how little they are. My life was such that I never actually saw a real-live newborn until the birth of my first son, and I remember being struck at that time by how very small and fragile brand new human beings really are. And in spite of his immense birth weight, I felt the same sensation when Simon was born....which reminds me of a funny story from his birth. So the little guy had just been born, right? And I was holding him in my arms, looking down at his chubby-cheeked little face, and feeling the love sweep over my being, and pondering how it could be that each and every human being that has ever lived was at one time this small and vulnerable and dependent, and as the mysteries of the universe began to unfold before me in the barely-opened eyes of this freshly-hatched little squirmasaurus, my wife suddenly started yelling, "still attached! STILL ATTACHED!"

Yeah, those umbilical cords aren't quite as long I thought. Heh.

Anyway. No neat endings tonight. Off to catch some zzzzzzzz.
Posted by Unknown at 8:45 PM 8 comments:

More of this, please 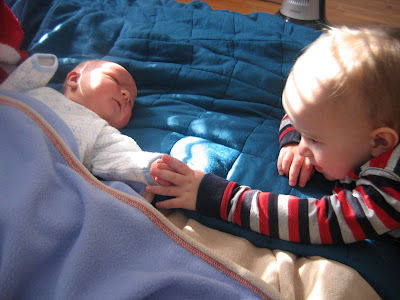 7 am on December 31st - the wife wakes you and tells you she's in labor. You know it's going to be a very long year-end closeout. 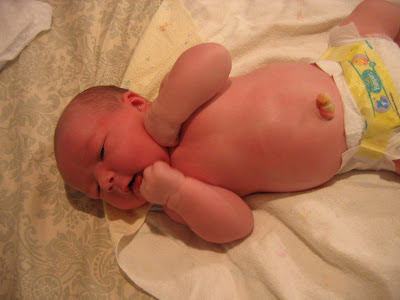 He's 9 pounds and 11 ounces of pure baby goodness. Welcome home little guy. You may have been late, but we're just glad you showed up. We love you little guy.

Thanks to everyone for all your kind words and well-wishes.
Posted by Unknown at 11:34 PM 13 comments: