Or, bullet point versions of posts that The Holmes has been wanting to write, but hasn’t the time for currently

One of my coworkers maintains a Word Of The Day section on the dry erase board in her cubicle, to which anyone is welcome to contribute. This is the latest contribution: 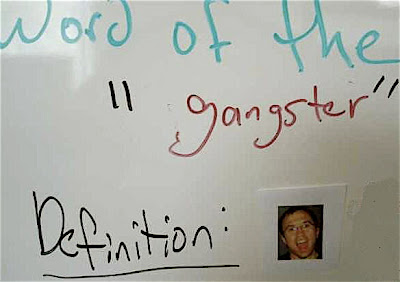 Email ThisBlogThis!Share to TwitterShare to FacebookShare to Pinterest
Labels: my gangster lean

Standard play time is 8:00, so I was caught unawares

While it is true that I am guilty of making the occasional idiotic wisecrack about their humble origins in the backwoods of Appalachia*, the fact of the matter is that I actually quite like midwives and doulas. The ones I've met anyway, they all seem like good people, undoubtedly a breed unto their own. Not to mention the fact they've got the skills to bring the biscuits, and that's some skill worthy of respect.

But who knew they could be so dramatic?

See, in preparation for the birth of our little Mo'mo, The Ash and I are taking a class in natural childbirth taught by a midwife and doula pair. In spite of their slightly disorganized manner, in spite of the fact that our books didn't arrive in time for the first or even second class, in spite of the fact that class is every Tuesday night for six weeks and I typically have a crappy attitude about going since it's Tuesday and Tuesday is just Monday's frumpy cousin with no personality, in spite of all that, I already feel better prepared for this birth than I did for the last one. Sure, we took a class to prepare for Henry's birth, but all I really remember of it is how careful the teacher was to match up each couple with a baby mannequin of the appropriate color. Because there's no way I could ever care for a non-white baby mannequin.

So far in this class, there have been no such awkward acts of color coordination, but that is not to say that nothing of note has taken place. In fact, at our very first Tuesday night session, the doula lady kicked things off by freaking my shit out. Without warning, without preface, without the slightest inkling of what she was about to do, she suddenly started acting out the part of a woman in labor having a very serious contraction. My first thought was, "Oh look, she's pretending to have a contraction. Gosh, she could have warned us." But then the act continued, the moaning, the rocking back and forth, and all the while the midwife stayed by her and soothed her. The student body, we all kept our seats and said nothing. And then the thought occurred to me, what if this isn't an act? What if she's having some kind of seizure right here in front of us and nobody is doing anything because we all assume she's acting out a contraction, but in fact somebody needs to be calling an ambulance right fucking now? You know, like when actors actually get stabbed on stage because some knave switched out the dummy knife with a real one, but the audience doesn't react because they think he's just acting, which is truly ridiculous since that bastard couldn't act his way out of a paper sack and the only way he could ever deliver a convincing death scene is if he was really dying so it serves him right anyway? Not that I would ever do such a thing, mind you. I began to wonder if I should speak up, if I should run for the phone, if perhaps my long dormant first aid skills would be required to save the day.

Thankfully, just as I was about to spring into action, she brought her little act to a close, which was a relief since we paid good money for that class and we didn't need our teacher to go all spazoid on us.

Not that I mind a bit of dramatics thrown into the midst of everyday life. I have a rather expensive piece of paper from U of T that implies as such. Still, a bit of warning next time ladies.

* Yes, I know midwifery did not originate in Appalachia, but for some reason the two are hopelessly intertwined in my brain, so that's just how it has to be.

Be a lot cooler if you did

School started up for me again this past weekend. Tricky bastard totally snuck up on me. I had known all summer that there was this magical mythical day called September 8th upon which my studies would resume, but every time I sent up the periscope to see how far off it was, it seemed ages away. And then all of a sudden it was right on top of me. Lousy periscope.

Anyway, I'm officially taking twice as many classes as I did last semester (1 x 2 = 2). After we went over the reading list in my first class, I knew exactly what my first order of business was: finish Harry Potter and the Goblet of Fire as quickly as possible. There was no way I could just leave myself hanging in the middle of it. Books 5, 6, and 7 will just have to wait until the holiday break because I've got a nice hefty load this go round. Blogging may also be somewhat sporadic. Of course, baby # 2 is due right around that time, so he may have something to say about how much reading I do. Ah well, so be it.

I did successfully complete the first order of business mentioned above, and have now moved on to my school reading. I won't bore you with any of the stuff I've now crammed into my head, but I would just like to say, if I ever have my picture included in a textbook, I hope it is as amusing as this one: 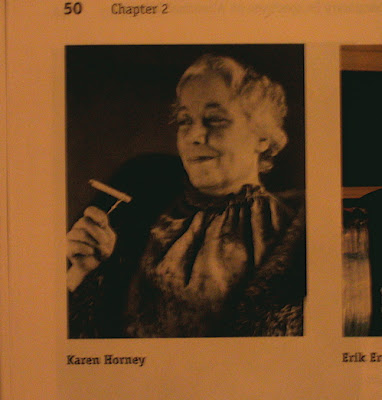 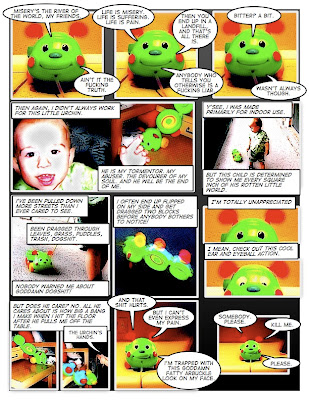 I kept intending to write this week, but the time kept getting eaten up, as if by magical creatures who sustain themselves on precious precious time. Consequentially, I dont' remember any of the stuff I was going to write. Anyway, our place is good to go now and it's up on the great big market, so now somebody just needs to come along and fall in love with it. It is quite lovable, after all.

We did still manage to have ourselves a little gathering of folks over here this weekend. I guess it was the house-warming party that we never got around to having. Maybe we'll do better about warming up the next place. 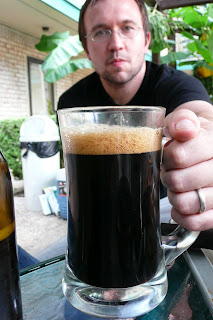