One week ago today, I took the razor to my own face and hacked my beard clean off. It had been there nearly two years, since right around the time Simon was born. We had some friends coming over to the house that night, so Ashley begged me, BEGGED I tell you, to keep just the mustache. And so... 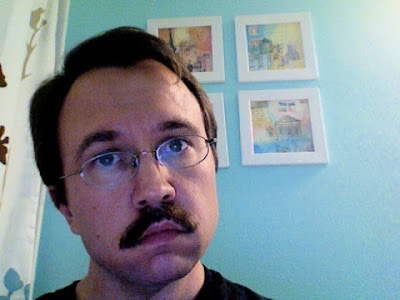 So what do you think? Race car driver? Bear hunter? Coach? Personally, I'd go with bumbling British detective. 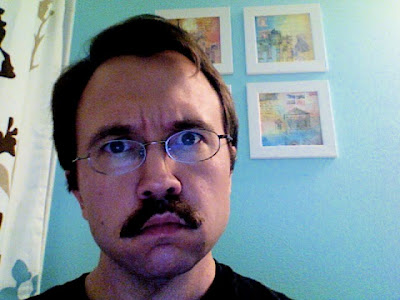 In case you haven't seen me in the past week, allow me to assure you that the 'stache has followed the rest of the beard down the drain.
Posted by Unknown at 1:23 PM 5 comments:

I'm Sorry Mr. Jackson, I'll Never Know If You Were For Real

It was Sunday morning. I was in Genuine Joe's, my all time favorite coffee shop, my favorite place to sit down with a bottomless cup of coffee and my laptop, plunk my headphones in, and try to make some magic happen on the page. There are built-in bookshelves stacked with aged volumes that gives the place a home library sort of feel. Add to that the fact that I was sitting at a somewhat large table, and you'll understand why I didn't give it a second thought when a girl walked up to the other end of my table and quietly set a book down, then walked away. It was an intentional setting-down action, careful, as if it needed to be placed in that exact spot with no discernable sound created by the meeting of book and table. I noticed also that no title was visible, either on the cover or the spine. And I noticed the note card poking out from the book's pages. But still my focus remained on my work.

It was only later when I reached something of a stopping point that I looked over at this book that had been placed within arm's reach of me and noticed some writing on the note card. I opened the book to the place where the note card was sandwiched, and I found this:

Social experiment? Bizarre act of random charity? Would a trap door open beneath my feet when I lifted that wooden Indian? As a former member of the teenaged demographic, I can attest to the fact that a 20 dollar bill has approximately .031% chance of playing a part in any of these schemes once it has fallen into their hormone-riddled hands. Still, I liked the idea that perhaps there was an experiment being conducted, bill or no. But why was the book placed closest to me? My kindly face? Perhaps that book with that notecard has been floating around Genuine Joe's for ages, and I was just the latest to find it.

I closed the book and put in a little more time on my writing. On my way out, I poked my head into the Boardroom. There was indeed a wooden Indian head on the bookshelf, but if Mr. Jackson was hiding under it, I'll never know. That head, I decided, could stay unturned.