Normally when I think about a badass ice chest, I think of the one that my friends Bill and Aaron bring with them to parties. These guys are serious beer drinkers. They don't like to worry about the selection and quantity of beer that will be at the party or whether there will be enough room in the fridge to store their stash, so they just take care of both problems themselves. Whenever these guys come rolling in, you can be sure that one of them will be pulling their badass ice chest along behind them (it's got wheels, yo) and that it will be packed with an ice cold assortment. Theirs is a badass ice chest indeed.

But that's not the badass ice chest I'm talking about here.

My wife started out the new year by letting some doctor cut open her shoulder and saw on her bones. Her shoulder had been hurting her for well over a year or something, and it's still hurting her now, except  now it's hurting because it's recovering from surgery and not because her shit's all fucked up. At least that's the hope. That's what we're paying you for, Dr. Shoulder Scraper.

To help manage the pain of her recovery, our insurance was kind enough to pay for this neat little ice chest contraption that, while not wheeled or filled with beer or even very large, is pretty badass in its own way. Its sole purpose is to pump ice cold water into a pad that can be placed atop an injured area of a person's body. Check it out in action: 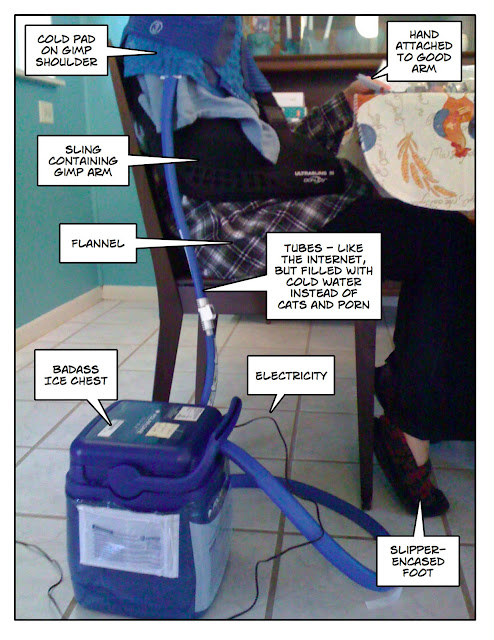 "The fuck are you doing?" was the question I had to answer of my wife right before I took this picture. "Don't worry, I won't include your head," I assured her. It's not that my wife is not beautiful because she is, but a period of surgery recovery is not a person's most attractive time. You're all tired and drugged and worn-out and slow-moving. An attitude of "fuck it" pervades all but the most essential hygiene-oriented tasks. You're doing good to get a shower. Flannel becomes like, the most wonderful fabric ever.

As you can see, this ice chest would not hold a lot of beer, but it does hold significant powers of pain relief. For the first few days after surgery, I was filling it and refilling it with a fresh load of ice and water several times a day, along with fetching pills, keeping everybody fed, reasonably clean, clothed, entertained. Oh, and trying to get some work-work done. Yay for working from home. Lucky for us, we've gotten a lot of help from family. Somewhere in there I turned 35. I had a brief episode of depression inspired by feeling like I haven't accomplished enough with my life, got mostly over it, then went and made dinner.

Here's hoping this is the most pain we suffer all year.
Posted by Unknown at 4:17 PM 10 comments:

This morning, I caught my youngest at the tail-end of a waffle, and I realized that he needs to play the central role in the remake of a classic commercial.

Happy New Year everybody! Hey, let's skip the part about how I've barely touched this blog thing here lately and jump right into a discussion of chicken business! Exclamation points!

What is chicken business, you ask? Well for starters, it's fun as fuck to say. Go ahead, give it a shot. Say it out loud. If anyone in earshot of you asks what you're doing, just look them in the eye and say it again.

That's nice, isn't it? Perhaps it evoked certain images in your head, hmmm? Chickens exchanging currency for goods or services? Little chickens in little business suits squawking over their little deals? A rooster in a limo pulling up to a corner where stands a fake-fur-clear-heel-clad hen of the night?

Well, you're wrong, dirty and wrong. Chicken business is nothing of the sort. Except, I suppose, when it is.

Here be a picture of a hen: 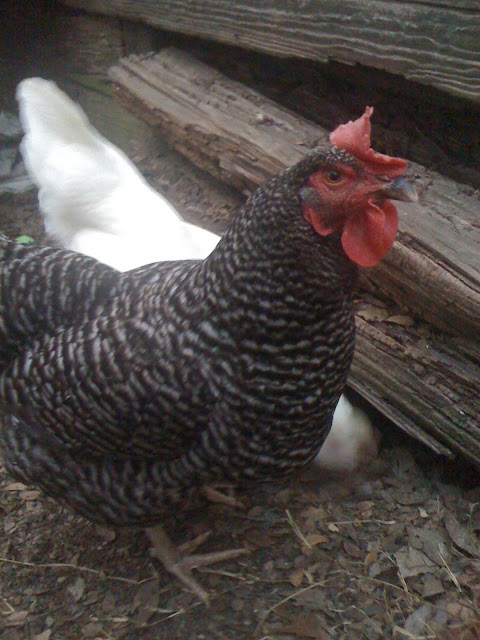 This is one of our hens. She is of the breed known as Barred Rocks, and she sits at the top of the pecking order among our little flock. She doesn't have a name, but an apt one for her would probably be Busy since she conducts the aforementioned but as yet undefined chicken business.

Here is a picture of a backyard playset: 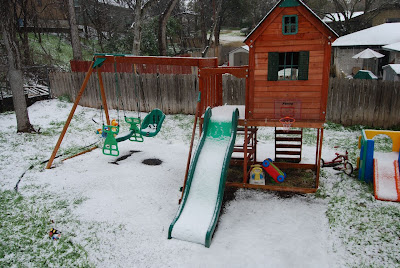 Ignore the snow. It never snows in Austin except for this one time last winter when it did, so I went around taking pictures of everything with snow all over it. Otherwise I would never just take a picture of a kid's playset, which is why I don't have any non-snow pictures of our playset, which is why you have to look at this one with snow all over it. AHEM!

So every now and then, the Barred Rock hen pictured above, who may be named Busy or Business Time or some such, likes to flap her little wings and transport herself up, up, up into the clubhouse section of the playset. It's amazing, really, the way she navigates herself through the little doorway. None of the other chickens do this trick. It's hers and hers alone. Perhaps it's this kind of initiative that propelled her to the top of the pecking order in the first place.

The boys took note of this little feat one day and asked their mom why the chicken was getting into their clubhouse.

But wait, that's not all of it. There's more to chicken business than just that. Because you see, whenever Busy flaps up into the clubhouse and the boys are around to see it, they sound the alarm with a cry of "CHICKEN BUSINESS!" and spring into action. They race up to the clubhouse where one of them scoops the poor girl up in their arms and then, well, from there she meets one of two fates. Either she's thrown out the door that she originally flew in through and has to flap her wings furiously in order to prevent an unpleasant reunion with the ground, or else she gets to take a ride down the slide in the lap of whichever boy picked her up.

And that's what Chicken Business is all about, Charlie Brown.
Posted by Unknown at 9:26 PM 6 comments: