One of my cousins on my father's side was killed in a car accident two days after Christmas. I didn't know him much, but he was just two years younger than me and he was the firstborn child in that family. I'll be damned if I didn't hold my little boy a little tighter when I heard the news. I have only the slightest inkling what his parents are going through right now, though it's more of an inkling than I would have had a few months ago.

Posted by Unknown at 9:50 PM No comments:

So as a Christmas present to ourselves, me and the Ash purchased a new computer...or rather, we purchased the components of a new computer, which her technically inclined bro then assembled into complete machine of asskickness. Keep in mind that many of the system requirements for the new 'puter were based around the ability to play Civ IV, which the Ash is a HUGE fan of. So no sooner was this new beast online was the old one disconnected, shoved aside like last year's crop of supermodels. Which was fine except for the fact that I'd left all the information necessary for updating this here site on the old one. How the hell was I supposed to plaster my every thought and observation to the internet for all the world to peruse and ponder at its leisure, either over a cup of morning joe or a glass of evening whiskey? The old PC's gargantuan DeskHog 6000 monitor grinned vindictively at me, like some tired old gangster forgotten by the young men of his crew that now run the show, but he knows he's the only one alive that knows where the money from The Big Job is hidden. And he ain't talkin.


As you can see, I figured it all out. Somehow.

Interestingly enough, during the time that I could not blog, stuff kept happening that would make me think, "My, what an interesting observation I have there. I should blog that. Oh wait." Like this show I saw on the National Geographic channel about wolves and their behavior, and it occurred to me that wolves are a lot like fratboys: they're assholes that run in packs. Except that I can see the purpose of wolves in nature. Not so much with fratboys. Wolves don't graduate and go on to vote straight-ticket republican.

Oh, and little dude has started smiling, which will totally melt the coldest hearted bastard out there. I mean wow. That brightens up any shitty day. Or good day for that matter.

And the party we had for our friends to come meet the little guy. Irish coffee, apple cider, quiche, and one little baby. Aw yeah. And the lox! Mmmmmm. We're among the first in our immediate circle of friends to take the plunge into parenthood, so Hank was the only child there, and of course, all eyes were on him. I got to demonstrate his Sumo Baby act, which if you haven't seen it, be sure to ask me to show it to you next time you see me, but do it soon before he's too heavy. It's interesting to look around at your circle of friends and realize that these are the people who are outside of your family, but whom your child will be around as he grows up, and also whose kids your kid may play with sometimes. Surrogate aunts and uncles, if you will. Makes me glad I don't hang out with those child-hating crack addict murder clowns any more. Might get awkward.

And now? Now, I am on vacation from my job from now until mid January while the Ash goes back to work temporarily. That's right, I am, for now, a STAY AT HOME DAD! And dude, it rocks. This is my second day at it, and I must say, I dig. Funny, he's only two months old now, but since the time that we brought him home, my confidence as Dad has increased significantly. In the first weeks of little dude's life, I was nervous as all hell when Ash would leave the house, like I was being abandoned with this ticking twitching living bomb thing that was going to explode at any moment into a blast of high volume needs that I wouldn't be able to meet, try though I might. Thankfully, things have improved.

We got some presents in the mail last night from relatives. Since our very first Christmas together, Ash and I have always opened our presents early, usually the day they arrive, like a couple of kids who don't have their parents around telling them they have to wait until Christmas. As we were tearing into them, Ash asked me if we were going to make Henry wait until Christmas to open his presents. Heh, looks like this is our last year to open presents early.

Posted by Unknown at 9:49 PM No comments:

Twisty Thing That Is Red

Not sure what to get the little ones in your life? Perhaps Baby Bush is the answer!

Posted by Unknown at 9:39 PM No comments: 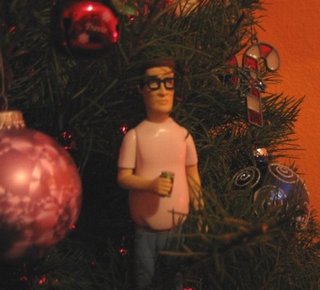 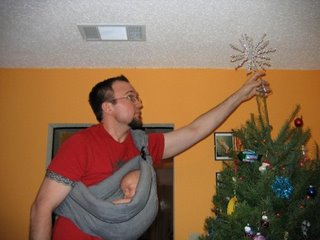 Posted by Unknown at 9:25 PM No comments:

Gramma got run'd over by sashimi

Would anyone else find it odd to be sitting in a semi-upscale sushi restaurant, complete with the black-clad sai-toting waitresses and the hefty price tag, and suddenly realize that what you are hearing over the PA is none other than "Grandma Got Run Over By A Reindeer?" Such was our experience Saturday night at Mikado where we celebrated the Ash's 30th. It was like the D.J. from Threadgill's was brought in to cover for their usual guy or something.

Posted by Unknown at 7:50 PM No comments:

Yesterday afternoon, I tossed a length of rope into the back of the Outback and headed down to the local Home Depot where I acquired a fine full specimen of point-towards-the-heavens greenery, which I tied to the top of the car like a deer carcass with my trusty Eagle Scout knot-tying skills and carted on home to be done up with all manner of lights and ornamentation like some sort of tacky Broadway has-been who spends her days in a haze of wine and skinny cigarette smoke and converses with the ghosts of gentleman callers past.


Actually I'm sure the tree will be perfectly tasteful. As tasteful as a Christmas tree can be, anyway.

Dunno 'bout the rest of you folks, but for me, having a kid around has sort of brought out the guy in me who always has a camera on him. The guy who sees a potential special memory in the making at every moment. I actually got upset when the Ash suggested that we not get a Christmas tree. How can we not get a Christmas tree?! We have a baby! WHAT ABOUT THE BAYBAY?!?!

This attitude totally conflicts with the dude in me who staunchly believes that such things are a total bullshit waste of time distraction from the true suffering and desperation that real people are going through in the world right now. This dude has been in charge a lot longer than the other dude, but sentimental family dude is making a play for his share of turf. These two dudes are either going to have to learn to get along somehow, or else one of them's going to get the shit kicked out of him by the other. What I actually predict will happen is that they'll take turns being the ass-kicker and ass-kicked, like in Spy vs. Spy.

Posted by Unknown at 7:50 PM No comments:

You can totally ignore the title of this entry. I started it a couple nights ago, some blather where I wondered to myself just how did the cavepeople deal with their screaming cave-babies without attracting every sabre-toothed tiger in the neighborhood. Except then I got distracted and saved it for later, and now I don't remember where I was going with it or what my point was. So sorry. You don't get to read that bit of cleverness from me. Let's talk about something else.

At this moment, I've got little dude sleeping in the sling which is slung round my big daddy shoulders. It's always cool when he does that, because I'll tell ya, he doesn't always. All the sling advocates out there in the parenting advice world make baby-slinging sound like this magical, wonderful, and best of all, easy means of keeping your child close and relaxing him. Put sling on, insert baby, boom, you win parent of the year. Well even though my kid speaks not a LICK of English, he informed me in so many words that this is not so. The whole sling thing takes work, it's not always easy, and he's definitely not always okay with it. Sometimes he is very not okay with it. But right now, right as I type this, he's in there, and he's cool. And that is just how it is.

Today is Ash's 30th birthday. Mine is in another month. We've got one of her sisters lined up to babysit for a couple of hours while we go gorge ourselves on some sushi, a pleasure that she denied herself all throughout pregnancy. I'm not sure how I feel about turning 30. I mean, I'm not all freaked out like oh shit, I'm getting so unspeakably old, I need a sports car and a line of credit at the Sharper Image and some eighteen year olds STAT. That's not til 40, right? ;) But it's not the increasing age that I'm concerned with, it's more the person that I continue to become as I age. The guy I am now is not the guy I intended to become 5, 10 years ago, but for the most part, I like the guy I am now, and I recognize that the guy I intended to become back then, while he had a lot going for him, he was kind of a judgmental shallow jackass, not anyone that I'm sure I'd like to be (except perhaps for the writing plays for a living part, that would be alright I guess). Anyway, mayhaps I'll reflect back on this more when my 30th rolls around in January.

My biggest accomplishment as of late: to gain the ability to maintain a state of relative calm whilst the biscuit screams his little head off. Not like I'm some Zen master or anything, this skill only applies to my baby and my baby alone. I'm sure the Ash has attained this to a greater degree than I since she spends more time with him during the day, and I'm also sure that anybody else's kid screaming would be like a million fingernails scraping a million chalk boards. And it's not like he doesn't know how to scream, as I'm quite sure I've already suffered more permanent hearing loss than from all the concerts I've ever been to combined. Nor is this ability permanent, as it can wear off. I would liken it unto the shields on the fighter ships in Star Wars. They'll only hold for so long because the technology is imperfect, much like my cool will only last for so long because I am, surprise, imperfect. All the same, if I can keep cool long enough to help little dude get through his cranky patch, and maybe a little of my calm rubs off on him, then I have done something right.

Posted by Unknown at 8:09 PM No comments: