The Water Must Flow 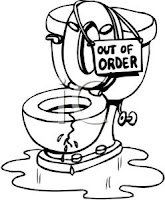 So there we are. Last weekend. My wife’s birthday bash at our house. We’re all full of food, full of drink, full of the joy of each other’s company. Were you to walk through this gathering, you’d hear snippets of witty conversation and astute observations about any number of topics. But then somewhere in there, you’d hear something else.

“Uh, dude, our sump pump’s making a fucked up sound.”

Yes, it’s true. Right at the tail end of my wife’s birthday party, our house belched up the best gift of all: no more indoor plumbing.

The long and the short of it is that it’s fixed now and we can once again allow water to flow out through its various exits, along with all the wonderful things that water sweeps away with it, only a small amount of which backed itself up into one of our bathrooms. Really, it could have been so much worse.

The plumber that came to our rescue labored outside for several cold drizzly hours, and when he was done, I thought to myself, never again will I take our waste-water system for granted. But then I thought, wait, of course I will. I take stuff like that for granted all the time.

Sure, in that moment, and now as I’m sitting here thinking about it, I’m quite aware of all the mechanisms in place that allow us to send water and its baggage on its merry way. And then last night, when somebody smashed their car into a utility pole and knocked out the electricity in our hood, I was very aware of it, too (that’s right, we lost water and power in one weekend. It was Little House On the Prairie up in here). But gratitude for everyday conveniences is a fleeting thing, am I right? We only think about them when we’re forced to do without them. And I know I’m not the only one here. I’ve seen your Facebook statuses. I’ve read your tweets.

Truth is, though, I tend not to be as grateful of a person as I’d like to be. I’m aware, in a theoretical sense, of the power of gratitude to increase one’s happiness, but I’m not often so great at making the leap into actually being grateful. At least not on a regular basis. I have a shitty way of focusing on the things I don’t have instead of the things I do, even though I try to instill gratitude in my kids all the time. Be grateful, dammit! Honestly, on the list of things about myself that I wish I could just change with a snap of my fingers, this is probably in the top 3, right up there with the ability to draw and having a sixth finger on each hand.

Maybe it’s the issue of it being a thing of being, of being a certain way, as opposed to doing something. Perhaps the doing leads to the being. Do the gratitude, be the gratitude, or some such snippet of wisdom.

So how’s this for some doing? A look back over this past weekend’s adventures with my gratitude goggles on. I present to you a list of things I’m thankful for, in spite of the shit.

I might be back to not thinking about the portal opened by the little handle on the toilet as soon as tomorrow, but for this moment at least, I’m pretty stoked that the damn thing works.
Posted by Unknown at 9:59 PM 2 comments:

Email ThisBlogThis!Share to TwitterShare to FacebookShare to Pinterest
Labels: birthday, i have awesome and talented friends, it's called gratitude, my wife is awesome, place called Home, the things you own end up owning you

And Speaking of Ninjas...

The following story originally appeared on The Badgers of Uncertain Fortune where some friends and I endeavored to all write one short story a week. It was one of my favorites to emerge from my fingertips during that exercise. The writing prompt that started this one was "My Imaginary Friend."

“Lie back on your mat and close your eyes.”

The instructor’s voice lilts across the room and the class gladly obeys. It has been an exhausting hour of stretching, posing, balancing, inverting. A bead of sweat races down my brow, but like everything else that vies for my attention during these rare moments of stillness, I do my best to ignore it. The instructor walks between us, talking us through the savasana, guiding our awareness from one end of our bodies to the other and out to its farthest reaches, urging us to release any tension that we encounter along the way.

A tile in the ceiling above me slides away and a shadow appears in the opening, the blackness punctuated only by a pair of eyes. Ninja. The shadow looks down at the prone forms on the floor beneath it, at the instructor with her back turned, looking out the window. “Relax your toes, relax the space between your toes…” It then looks straight down at me, lying still on my mat with my eyes closed, trying - without trying to try - to be aware of as little as possible.

The shadow drops out of the ceiling. Falling faster than gravity, he pulls a saber from a sheath strapped to his back and pivots so that the point of the blade is aimed at my throat. The sunlight streaming through the window strikes the sword, only to be absorbed by the ninja magic that imbues the metal.

Barely the length of a baby cobra fang lies between the tip of the blade and the flesh of my throat when an arm clad in silks of green, pink, and yellow reaches down out of the hole through which the ninja just emerged and grasps the shadow warrior by the ankle, halting his descent. As he is pulled back into the ceiling, the ninja looks up into the blackness between the third and fourth floors and sees the face of his undoing. A whisper escapes his lips, the first word he has uttered since beheading his former master and entering the service of the shadow.

And then he is gone. No sound reaches my ears, nor those of my classmates. Our eyes see only the insides of our eyelids. The instructor thinks that perhaps she hears an insect flying through the room, but ignores it.

The instructor’s voice reaches me as if from the other side of a dream and I wonder, as I always do, if I have fallen asleep. I wiggle my fingers, wiggle my toes. I open my eyes and think nothing of the unremarkable ceiling above me.
Posted by Unknown at 11:54 AM 1 comment:

Good Day To You, Sir!

Here's how we in the Holmes household feel about the end of Movember's impact upon my face:

Both of those lightsaberish instruments you see me using there came absolutely free from the nice people at Philips Norelco, but rest assured that the opinions you see below are mine. I call them nice folks because they donated an extra $15,000 to our team, effectively doubling our team's Movember contribution, and all they asked was that we use their stuff and put it on video. Why, that's just downright friendly.

The Vacuum Stubble and Beard Trimmer rules if for no other reason than it vacuums all the hair up as you slice it off of your face. NO MORE CLEANING UP STUBBLE OUT OF THE SINK! You can't imagine how happy this makes me. As for the SensoTouch 3D, I like the fact that it looks like a hydra, but doesn't yank the hair out of your face. Electric razor technology has clearly advanced since last I used one, many moons ago.

Okay Movember, that was fun. Now, on to writing about things other than facial hair.

Email ThisBlogThis!Share to TwitterShare to FacebookShare to Pinterest
Labels: i am a silly silly man, i got some free stuff, Movember, my wife is so very patient, reviews of stuff and things, video
Newer Posts Older Posts Home
Subscribe to: Posts (Atom)