Guitar playing has been making more regular appearances in my life recently. Time was I played for hours every day, not because I was trying to master the instrument, but because playing the guitar is about a billion times more awesome than not playing the guitar. Simple fact.


But over the last few years, my guitars and all the stuff that went with them got shoved further and further back in various closets. At one point, I even sold my amp, the very amp with which I once stood in front of a room full of people and played a series of several of the more recognizable segments from the music of “Star Wars.” Have you ever heard The Force Theme through heavy distortion, chorus, and just a subtle, dare I say, sublime hint of wah pedal? Yeaaaah.

Probably my most rock star moment.

But aside from pulling the old girl out of the closet every now and then to blow through a few verses of “Daddy Farted,” there wasn’t a whole lot of music getting made around here other than the kind originating with magical fruit. Is there anything sadder than a neglected musical instrument? Well I guess there’s beached whales and war orphans and cancer and...so yes, lots of things are sadder than a neglected musical instrument. But still, I always let out a sigh at the sight all the dust gathered on the headstock. Dust shows up really well on black.

Nobody ever said, “I wish I’d played less music” on their deathbed.

So like George Michael, my guitar’s now out of the closet and has no plans to go back in. Next to it sits a single-speaker Marshall practice amp that, in my opinion, sounds an assload better than the old Fender I used to use. This is becoming a regular thing. As in daily. And it feels nice.

A funny thing happened while I was playing earlier. My five-year-old came down, watched me for a minute, then went and found the case with my ancient acoustic. The thing is tiny. As in, you could be forgiven for mistaking it for a large ukulele. It’s still a bit large for his little hands, but the way he’s growing, that won’t be the case for long. He sat down on the bed next to me and asked me to show him how to play the guitar.

Stop and consider that: my son asked me to teach him how to play the guitar.

The first and I guess only guitar teacher I ever had was a guy named Robert that was the spitting image of David Lee Roth’s hair and smoked cigarettes in the little room at the back of H&H Music where he taught classes. He spent the first five to ten minutes of every lesson noodling around on his guitar, presumably to show me how awesome I, too, could be if I kept practicing. The first song he taught me was “Wanted Dead Or Alive” by Bon Jovi. I wasn't what you'd call a Bon Jovi fan, but I practiced the shit out of that opening bit. Props, Richie Sambora. Props.

All the same, I won’t be teaching my kid any Bon Jovi.

So I showed him a few basics and then it was time for dinner and then we did some other stuff and then later we were all over the house all doing our own thing, my thing being playing my guitar again, and the little dude came back in, sat the acoustic on his lap, and declared:

“I almost forgot, it’s time for my guitar lesson.”

So I showed him a few more things. He struggled, mostly because he’s still a little dude and his fingers just aren’t quite strong enough. But struggle he did.

“When do I get a guitar like that one?” he asked, pointing at my electric. It’s not anything fancy, an Epiphone (i.e. budget Gibson brand) version of the SG. But it does look cool, and it sounds nice.

“Before you can get one like this, you need to practice on this one,” I told him, indicating the acoustic sitting in his lap.

“I like mine too. But this one,” I said, placing my hand on the curve of the acoustic’s wooden body, “is the very first guitar I ever played. It’s the one I learned on. I told my mom I wanted to learn how to play the guitar, so she pulled this one down out of the attic and took it to the guitar store. They fixed it up for her, put new strings on it, and then she took me take guitar lessons.”

I don’t mind telling you, I got a bit misty recounting that memory to my son. My mom did that for me. She didn’t know the first thing about guitars other than that her kid wanted to know how to play one. She could have put me off, maybe I’d have found a way on my own, or maybe I’d be walking around all these years later with a guitar shaped hole in my soul. And wouldn’t that suck? But she didn’t. She found a way to make it happen.

“Can I get guitar lessons?” he asked.

“Yes, with me," I said, feeling like I should grab a fly out of the air with my chopsticks as I said it. "And I’ll make you a deal.”

Here’s the part where I make a deal.

“If you’ll do some lessons with me and practice and keep it up over the next year or so, then we’ll see about getting you something that’s a little nicer. In your size, of course. What do you think of that?”

So who knows where it’ll go. He might forget all about the stupid guitar tomorrow, or he might decide after a few lessons that guitars are for chumps.

But not before he learns how to play a power chord. 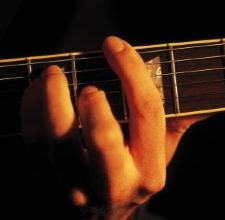 Email ThisBlogThis!Share to TwitterShare to FacebookShare to Pinterest
Labels: guitars, life lessons, music, now i am the master, rock out

When you put headphones in your ears and hit play, you're basically saying, "This is my bubble, and I am going to be alone in it for a while, just me and this music." Sometimes when I make this bubble, I like to be extra alone. That is, I don't want any other voices in there with me. Particularly when I'm writing and trying to make something happen with words, I just want a little soundtrack, nobody else's words rattling around in my head. When I'm in this mood, I turn to this mix that I made in my iTunes that has several days worth of instrumental music of all kinds. Super mega nice person that I am, I thought it would be fun to make a randomish mix of it for you....just me shuffling through until I picked out a nice dozen. Go listen if you want to. Below is the track list along with tweet sized, er, not sure what you'd call these....responses? that I came up with for each of them while listening. Enjoy. Or don't, whatever.
Tipsy - "Nude on the Moon" from the album Trip Tease

You can either look up at the moon and be entranced or ignore it altogether, kind of like this song.

Blockhead - "Tricky Turtle" from the album The Music Scene


Sidewalk strolling, sun rising over rooftops, casting the city in blinding shades of beautiful. Everybody wake up.

Madvillain - "Do Not Fire!" from the album Madvillainy


Long hallway, narrow, lit only by blinking fluorescents. Unlocked rooms on either side housing the insane. The exit is chained.


"Everything's gonna be all right" is a lie, but there are brief periods where all is right with your little world.


Our people are everywhere, friend. Hide at the bottom of the ocean, we got a shark with our logo on his fin ready to eat you right up.

Medeski, Martin, & Wood - "Bloody Oil" from the album End of the World Party (Just in Case)


This desert's never going to let us out alive.

The RZA - "Afro's Father Fight" from the Afro Samurai Soundtrack

The Gaslamp Killer - "Ruskie Electric" from the album My Troubled Mind


We are at the bottom of the ocean in enemy waters and it would appear that the entire crew has been dosed with LSD. Your orders, captain?


At the start of each day, she held a tiny funeral for the previous one.


You were allotted three badass moments for this life. You’ve used none. You have ten minutes to live. Care to set up a combo?


My favorite thing about this band is the fact that they attempt to recreate their name in every song.

Email ThisBlogThis!Share to TwitterShare to FacebookShare to Pinterest
Labels: i am the nicest person ever, music, writing

Let It Be Known That From This Day Forth, I Am A Fan Of Kanye West

I've never been a huge Kanye West fan. Nothing against the guy, it's just not my preferred brand of hip-hop. I tend to like things a bit, I don't know...grimier. But I'm a fan now because last South by Southwest, he did this:

That band behind him is from Austin's very own Reagan High School, the Soul Raider Marching Band. Reagan, by many standards, is considered to be one of the worst high schools in the city, and hilariously enough, it's where our kids are zoned to go based on where we currently live (hint: not exactly the best area of town). My wife and I are all over the map as to the question of whether we're willing to send the boys there when the time comes. The school's got plenty of problems, the stats don't lie. But that's the thing about statistics: as honest as they may be, as much of a story as they may tell, they don't quite manage to tell the whole story. It's so cool to see these kids get an opportunity like this. 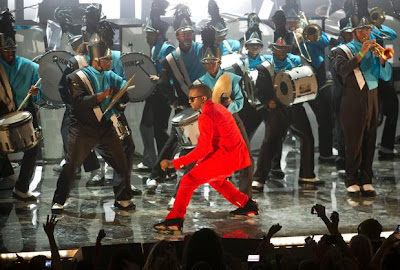