The Face of Delirious Joy

I was cleaning out my laptop bag earlier, and amongst all the other non-laptop related crap I've been lugging around, I found a program from "Teacher, Teacher", the play I was in a while back. Each actor was listed with a bio, brief bits about ourselves that they let us write on our own with no adult supervision. I was skimming through them, and it struck me that my own bio contains some very true bits of trivia about me. So for those of you who weren't lucky enough to make it to the show to take posession of your very own program, I present to you the aforementioned bio in its entirety, just in case you're ever called upon to recite some random facts about your buddy, The Holmes:

"Travis Holmes is going out for a beer after the show and you're buying, whaddaya say? He seems to recall doing theater before, but that's all in the past, so let's just move on, shall we? He enjoys rolling his eyes, heavy sighs, and saying ridiculous things with a straight face. He has a soft spot for frogs and raccoons. He thinks, no, he knows that zombies are overrated. As you read this, he is silently judging someone, or else he is rebuking himself for being judgemental. He swings eternally on a pendulum between profound sincerity and insufferable snark, which isn't easy for anyone. He can also beat you in a handstand race, and does an incredible cricket impersonation. He'd like to thank his wife and his two boys for letting him do this play, and he'd like to thank his two dogs just for being themselves. So, how about that beer."


--Forgive the typos, I wrote this post on my phone.

Any number of weird thoughts can worm their way into your brain when it's getting late and the baby refuses to sleep. Tonight the little dude wouldn't even let us hold him, so we just let him run wild for a bit in hopes that he would tap out his energy reserves. In that time, I found myself trying to come up with a version of Rock-Paper-Scissors with vampires, zombies, and werewolves. I guess you'd call this game Vampire-Zombie-Werewolf. At first the whole idea struck me as ludicrous because we all know that in the real world, werewolves would RIP VAMPIRES AND ZOMBIES TO FUCKING SHREDS! AND THEN GO LISTEN TO SLAYER AND DRINK TONS OF BEER! AND THEN FUCK THEIR BRAINS OUT AND THEN EAT 100 POUNDS OF RAW BEEF WITH FRENCH FRIES AND A DIET COKE!! RAAAAARRRGGH!

But then I thought, for the sake of the game, perhaps I should figure out the rules for who beats who. And of course the first thing I had to figure out was, who beats werewolf? Again, not in reality (see above), just in the game. Neither option really seemed feasible. I mean really, a zombie defeating a werewolf? I think the fuck not. Unless....yes, that's a thought, thought I, unless the zombies fucking BORED the poor werewolf to death. The werewolf's all "Dude, c'mon, let's fucking fight, I don't wanna miss the Slayer concert" and the zombie's just shuffling his ass along all "RRRGGH, LOOK AT ME, I'M SO SCAAAARY" and the werewolf's just tapping his paw and looking at his watch and checking his Twitter feed on his phone and he sees that all his friends are already at the Slayer show throwing bottles at the opening band and tearing up stupid humans in the moshpit and he just dies. Right there on the spot, of boredom.

But then I thought, wouldn't it be awesome if zombies defeated vampires by way of malnutrition? Zombies have no blood, or if they do, it's dead blood, so no nourishment. If a vampire goes after the zombie hordes for its sustenance, motherfanger's gonna starve to death. Yeah, I like that.

So that means that zombies get taken down by werewolves, which really isn't much of a surprise, unless....yes, unless we're talking about your 28 Days crazy vicious super speedy zombies, in which case you actually have a real fight on your hands. But still, werewolves beat zombies via claws, teeth, and unreasonableness. Oh, and Slayer bumping in their iPod. Werewolves listen to their iPods when they fight.

Which leaves us with only the vampire vs werewolf matchup to deal with. Following the rock-paper-scissors triangle of defeat, we're left with the ridiculous conclusion that vampires somehow beat werewolves. Normally I'd laugh off such a stupid notion, but for the sake of the game, I thought I should at least try to find a path by which a vampire could theoretically win such a battle. Vampires are dicks, so maybe they pull some shit around the new moon when a werewolf could be said to be its weakest. But that's not really a battle. No, how about let's say a vampire manages to sink his teeth into a werewolf's flesh and gets a sip of its blood. Not only does the vampire get some calories, he gets a dose of crazy werewolf badassness, which when combined with the vampire's strength gives him the added boost necessary to come out on top. In this way, it could be said that the vampire only beats the werewolf because of the werewolf's own strength. The vampire wins, but only because of the superior strength of its opponent. A hollow victory indeed.

So there you have it. Zombie malnourishes vampire. Werewolf shreds zombie. And vampire drains werewolf and uses its own strength against it. What say you? Any flaws in my perfect logic? This latest piece by the artist known as Henry appears, to the untrained eye, to be merely a series of meaningless squiggles of color rendered upon the page by a child turned loose with a paintbrush and a few cups of water-washable paint. And while this description contains elements of truth, it is incumbent upon any responsible viewer of art to look deeper than such John Q. Sixpack impressions. The very finiteness of this life which we mortals must inhabit demands that the learned among us engage in a kind of optical archaeology in order to uncover meaning when confronted with a piece such as this. 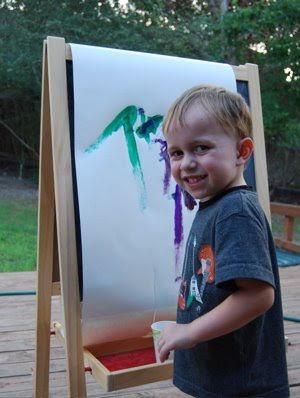 Henry is not without his naysayers, of course, and they will no doubt point to his previous forays into the abstract (some would say arbitrary!) in an effort to discredit this latest offering, as if their own obtuseness provided sufficient rebuttal to the declaration of value placed upon the products of a mind that they could not possibly hope to comprehend. 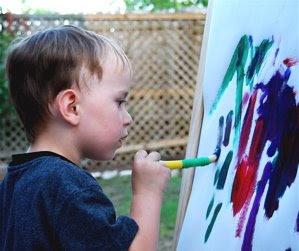 This work, however, indicates a new direction for an artist who has, up to now, been content working within the confines of chaos and disorder, not only imbuing the works themselves with explosive and indiscernible forms, but challenging even the limits of the mediums themselves through their seeming demise. For what is a work of art that the artist rends into pieces if not a new work? What is a room full of destroyed work but a new installation? Is the shock of the artist’s parents upon discovering this “mess” not the artist’s mission fulfilled? Do not make the philistine mistake of interpreting this as meaningless trife, for within the chaos resides meaning a thousand layers deep. The meaning does not arise out of the chaos, the meaning is within the chaos itself. The chaos is the meaning, the meaning is the chaos. The meaning of chaos defies the presence of meaning, and yet meaning refuses to disappear into the cloud of disorder, and is there for any and all with enough soul, heart, intellect, worldliness (pick your quality, truly) to stare deep into the maelstrom which the artist hath wrought. 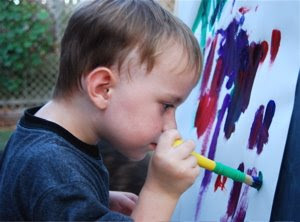 “But what is this?” the viewer asks upon only a cursory glance. For there, unexpectedly, set apart from the gashes of color that Henry has cut into the paper stands not one but two, TWO representations of the letter “H.” They stand nearby, outside of the snarl, sanctified from it. And not only outside, but above it. This indicates not dominance, for truly, only the fool’s fool would claim dominion over discord, but rather a creator-creation relationship. From the understood comes the misunderstood, which then goes forth into the world seeking understanding, but rarely finding any such comfort. Clearly, these two letters are representative of the artist himself. With these six lines, Henry has placed himself inside his own work, positioning himself as the creator, the bringer of bedlam, and in so doing, he has quite literally recreated himself. It is as if he understands his role as the unleasher of tumult, and has embraced it. Ironically, in adding clearly understood elements to his work, he has even further solidified his role as chaos personified. 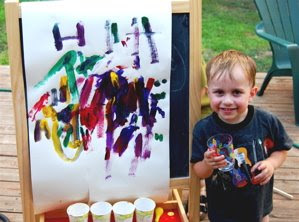 Email ThisBlogThis!Share to TwitterShare to FacebookShare to Pinterest
Labels: art, fun for the whole family, review

Every time we go to Costco, Henry wants to ride on the outside of the cart. Something like this:

And I always think to myself, "That's great, son. Learn a trade early."