We move in three weeks! Henry helps by tossing out all the CDs that suck.

Typically when I purchase a beer just because I like the label or its clever name, it turns out to be a mistake. That's how I ended up drinking Mickey's for so many years. Fortunately, such was not the case with Black Dog Ale. Being the caretaker of a black dog myself, not to mention a Zeppelin fan, I couldn't walk past it, and it turned out to be reasonably yummy. Who knew that my dog was running his own brewery? 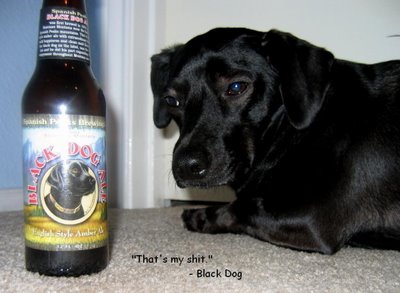 Posted by Unknown at 8:54 PM No comments:

I was just about shaking with anger by the time I finished reading this story.

"In December of 2003, Tara Turner, recently divorced and with a year-old baby, was looking for a day care center. A family-law attorney, she planned to work from her Hyde Park home and wanted a place nearby so she could spend as much time as possible with her son, Parker. The Hyde Park Baptist Child Development Center, run by the Hyde Park Baptist Church, seemed perfect, located in the middle of one of Austin's oldest and poshest neighborhoods, and run by one of the city's best known churches. Tuition was high, and there was a long waiting list for enrollment, but Turner visited the center and was impressed with the colorful classrooms and attentive staff. 'They seemed to run a very tight ship,' she says."

It goes on from there to tell the story of her son's abuse and the abuse of other children by one of the center's oldest teachers. Beyond that, the story makes it pretty clear that the church had been aware of this teacher's abuse for years, and had dragged their feet on doing anything substantive until the situation got too hot to deal with, at which point they let her go and tried to keep it quiet, and they might have succeeded had this crazy old bat not left a knot on the back of the head of the son of a family-law attorney. Oops.

What's really frightening here is that it's not like this mother was just dumping her kid off at Crazy Eddie's Discount Daycare. She was supposedly leaving her son in the best care that money could buy. Go ahead and read the whole story, but I find this part particularly interesting, though not surprising:

"Turner also took Parker to a therapist. She says he found his behavior to be consistent with post-traumatic stress disorder, including a recent tendency to imitate abusive behavior. Turner says Parker has become aggressive with other children and with Turner's pet terrier. According to Turner, Parker was sweet and gentle with the dog when the family first adopted it in the fall of 2004 but later began to kick, hit, and smother the 5-lb. dog. Also during that fall, when Parker was in Lowry's class, Turner says she noticed his behavior toward other children becoming more aggressive – behavior which has continued. According to Turner, the child who used to hug other children too much now pushes them down, unprovoked."

It's not surprising that this behaviour is coming out in this lady's son after what he's been through, and hopefully it's been caught soon enough that he'll be okay with time and some help. But the thing to remember is that somewhere in the past, there's almost certainly a variation on this story that occured in the early life of the teacher who committed this abuse. She didn't just wake up one day and decide to be an abusive old troll. No abuser, no violent offender, no murderous dictator happened like that. It excuses nothing, but I think it explains a lot.
Posted by Unknown at 7:45 PM No comments: 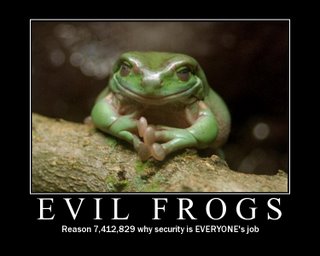 I might have made this. You might make one too.
Posted by Unknown at 11:18 PM No comments:

Some ol' bullshit I saw at Sears the other night

So the Holmes herd dropped into Sears the other night to pick up their family portraits that had been sitting there unclaimed for over a week. We had other priorities. Not to go off on a tangent, but I'm never giving that damn place any photo business again. I'm sure there are plenty of perfectly qualified portraiture professionals in the employ of Sears, but none of them were on hand the day we came in to get our mugshots. In fact, I don't think a single employee present that morning was over the age of 17. Our photographer showed up in a letter jacket.

Oops, looks like I went off on a tangent.

So back to my story. Right outside the portrait studio was this little toy display they'd tossed up in preparation for the coming Christmas toy binge. Get the little ones thinking about what Santa Claus had better bring if he knows what's good for his fat ass. And amidst the toy power tools and the toy mastodons with cool mastodon roaring sounds and of course the toy military crap...okay not to go off on another tangent, and I know I had toy tanks and guns and soldiers when I was a kid, but doesn't it seem particularly twisted to make toy versions of the implements of war when we're in the middle of wartime? Or is that just me not supporting the troops again? I hate it when I don't support the troops!

But ANYWAY, amidst all the other toys, I spotted this: 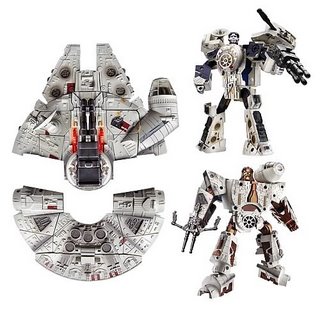 Look closely friends, but don't try to make too much sense of it, for what you are seeing is none other than a Star Wars Transformer. Let's see if I can explain this shit without the computer exploding. The one on top is Han Solo, and the one below is Chewbacca, and they both, um, transform into the Millenium Falcon, the ship that they both, uh, piloted together. Except now they each actually like, are the ship. They're like, some kinda cyborgs now I guess?

I'm not gonna lie to you folks, I had a really bad reaction when I encountered this idiotic toy. In the middle of Sears, I involuntarily shouted "This is bullshit!" No, you know what? Now that I think about it, I didn't even say the word "bullshit", I actually think I used the term "bullcrap." You know, the way a kid who looks like this might say it: 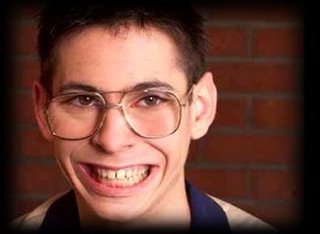 You know, like "Thith ith bullcrap!" By the way, that's Bill Haverchuck from the awesome show Freaks and Geeks. And even though Bill lives in a pre-Transformers world, I guarantee that he'd call bullcrap on this Star Wars Transformers nonsense in a heartbeat. Like me, he would be utterly offended, OFFENDED I TELL YOU, at the idea of this ridiculous combination. I don't like the idea of my son growing up in world where Star Wars and Transformers have been morphed together into some kind of Island of Dr. Moreau experiment. 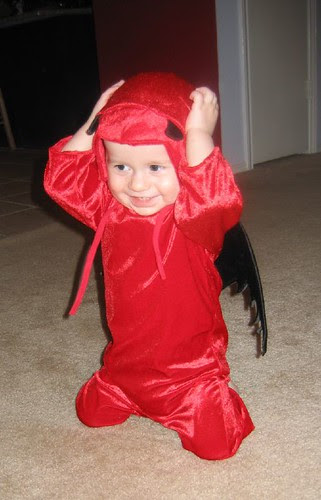 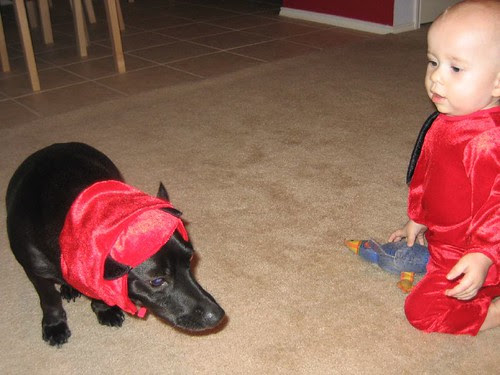 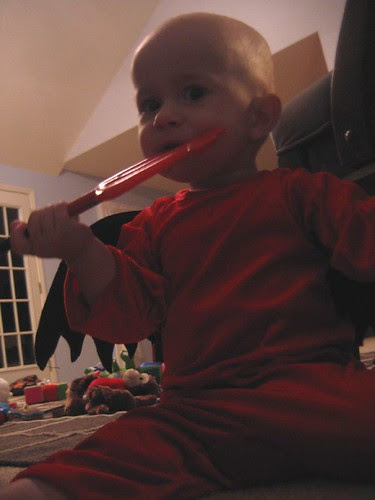 Halloween came a bit late for us this year. We had the costume all ready and everything, but then the little dude got sick the night of. But never fear friends, there was no way we were going to let a costume this awesome go by unworn, so last night we pulled it out of the closet, dressed Henry up, and let him torment a few souls for all eternity for a little while. Who knew the devil was such a cute little munchkin.

In other news, we sold our house! We're moving! Woohoo!
Posted by Unknown at 11:15 PM No comments:

These pictures please me. Thanks be to Brandon. 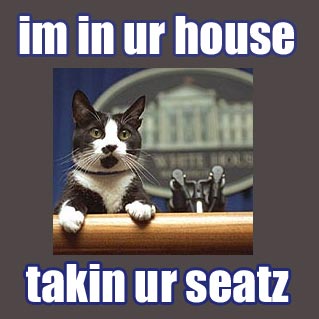 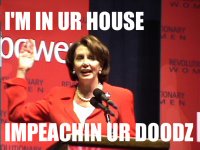 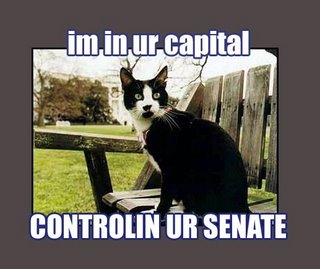 What came in the mail today

My apologies in advance for missing any of your social functions for the next few years because it looks like I'm going to be a little busy. As if I had nothing going on already. I'm sitting here looking at a letter from the Episcopal Theological Seminary of the Southwest telling me that I have been accepted to their Masters of Arts in Counseling program. It doesn't really come as a surprise, but then again it sort of does. Anyway, I'm going to be a wee bit busy, so if I'm not at the party, drink one for me.
Posted by Unknown at 8:27 PM 2 comments:

The dudes over at DadBloggers decided that I'm cool enough to blog amongst them, so I'll be dropping in a post about once a month or so over there. My first post went up today, and at the risk of getting a reputation as some kind of holy roller, I chose the subject of baby baptisms. Enjoy.
Posted by Unknown at 9:19 PM No comments: