I used to, though. From the time I was a little boy and was first taught about this God person entity being, I was taught the proper ways to address him. Er, Him. Head bowed, eyes closed. On your knees is good but not necessary. Out loud or to yourself, depending on the setting. Start with a nice greeting. “Dear...” followed by your title of choice. Lord. Heavenly Father. Or just plain old God. Give praise and thanks before you go asking for things so as not to seem like you’re mistaking God for Santa Claus. But definitely ask for things because everything comes from God, provided it’s His will. Just don’t go wasting God’s time asking for frivolous things, okay?

Among your entreaties don’t forget to ask for forgiveness for the sins you’ve committed. Even if you’ve been good, there’s something in there that needs forgiving, and the only one who can really forgive you in the saved-from-eternal-damnation sense is God Almighty.

Which brings us to salvation. How many hundreds of times must I have asked The Lord Above to save my soul? I was never 100% clear on the process. So I just ask Jesus to come into my heart? Like (gestures to chest) in here? Does he stay there or does he just clean me up and then go? And does this only cover sins committed to-date or am I covered for future sins as well? Do I have to keep doing this? I was never sure that I had done it right, so I repeated it, time and again. Salvation anxiety: it is real.

Once you’ve made it through all of your praises and givings of thanks and requests and your nine-thousand-four-hundred-and-seventy-third plea to be saved from burning in hell forever and ever and ever, bring it all to a close by stating in whose name you dare come before God (that would be Jesus’s), and then hang it up with a firm “Amen.”

I haven’t prayed in....a while. The short answer to the question of why I don’t pray anymore is that I don’t believe in God anymore. But even before I stopped believing, I had grown tired of that feeling that I was just talking to myself. I had grown so weary of never getting anything in the way of a response. A lot of people say that God and His answers to our prayers are all around us, even if we don’t recognize them, and that perhaps I should pray for eyes to see. A lot of people say that unanswered prayers are some of God’s greatest gifts. Well, I’m not a lot of people.

Some people want to define prayer a bit more loosely than the process I described above, which made sense. It’s just me and God, right? No need for all this ceremony. Some people want to talk about prayer like it’s meditation. Sitting still, quieting your mind, freeing your awareness to listen for God’s voice. But still, it all comes back to an attempt at communicating with an entity that is invisible, inaudible, odorless, flavorless, untouchable -- basically, a completely undetectable being whose entire presence is suspect.

“But God is all around us. God is in you and me and those kids and those old people and that tree and that dirt and that grass and that rock and that pitbull and, and....”

And what, Straw Man that I created and put words into the mouth of so I could get all huffy at it and it couldn’t respond? In what sense is God in those things? What reason do we have to believe that? And beyond that, if we’re busy trying to see God in everything, aren’t we sort of missing the thing itself in all its glory and wonder? Are those things only amazing and special and capable of taking our breaths away when we stop to really think about the fact of their existence if they’re somehow infused with this God of which you speak?

My answer is no.

Not praying has an interesting consequence, though. When confronted with a crappy situation about which I can do basically nothing, I’m left with little in the way of options. In the past, I could offer up a little prayer for the Lord above to intervene, somehow. It wasn’t much, but it was something. Now I don’t have that option. It would seem to do as much good as “sending good vibes” or whatever, a phrase I’ve been guilty of using, but which ultimately doesn’t do anything other than let the person on the other end know that I’m thinking about them and that I care. Which, I suppose, prayer does as well. If somebody says they’re praying for your situation, it’s just another way of saying that they care, and the fact that we believe differently in matters of God and religion becomes, in that moment anyway, tertiary.

So I don’t believe in God anymore and I don’t try to talk to him. Two connected facts of my person. I don’t remember what I said in my last prayer, but I sort of wish I could. It probably wasn’t anything special. But perhaps it should have gone something like this:

I don’t know why I’m doing this. I don’t even know...you’re not even listening, are you? You’re not even there to listen. I am literally talking to myself here, aren’t I? But I’m doing it anyway, so, I guess I’m saying this mostly for myself, and if by some chance you are there and you’re listening, then you’ll get the message too. Though that seems unlikely. I just want to say...look, I can’t do this anymore. I’m done. I feel like I’m fooling myself here, trying to talk to you, trying to listen, trying to discern your voice in everything. So, I’m not going to do this anymore, okay? If you’re there and you want to reach me for some reason, well, you’re God so you should know where to find me. Um, thanks, I guess.

Oh Yes, Mistakes Got Made

Earlier this week during my internet travels, I ran across a rather entertaining article about a 1995 Newsweek article wherein the author editorialized on the many reasons why the internet was doomed to go the way of Betamax. In a nutshell, his case boiled down to a belief that the state of the internet at that time was about as good as it was ever going to get, and its state, as you may recall, was not so great.

Obviously, things have improved, and pretty much everything in the article turned out to be wrong. Even the author himself, an astronomer and writer by the name of Clifford Stoll, has commented on how very incorrect his predictions were.

I feel for this guy, I really do. I seriously doubt he was the only one back then who was too preoccupied with the internet’s wackness to stop and think about its potential dopeness. He just happened to be one of the ones ballsy enough to put his thoughts into print. And then the internet got all big and amazing and his thoughts went from print to digital and got spread all over the very medium that he predicted would have been long gone by now. I don’t know Clifford Stoll personally, but I’m going to guess that this article presents one of the most inaccurate declarations of his lifetime. And there it is one the internet for the whole world to see and pass on. Shit, I put it on Facebook myself, along with who-knows-how-many other people. But hey, if you’re going to go playing Nostradamus, it probably helps to have a taste for crow, huh?

Stoll’s blunder may be more public than most, but he’s hardly alone in having made big mistakes. So in that spirit, I thought I would share some of the things that I myself have been wrong about, right here on the internet. And I’m limiting this to mistakes that occurred in my adult life because everybody’s stupid when they’re a kid.

Mickey's Fine Malt Liquor is good drinkin'!
Holy hornet balls, could I ever put that shit back. I fucking loved it. I drank it from the widemouth grenade bottles and I drank it from the 40 ounce bottles and I loved every drop. Now? I’d have to say it qualifies as swill. Plus it’s made by Miller, a brewer I'd rather not support any longer. Please note, however, that this admission of error with regards to the quality of Mickey’s is not a statement of regret with regards to my tattoo of the Mickey’s hornet on my calf. I’m still pretty good with that.

Vaccines are scary and bad!
When we were pregnant with our first kid, we started running across all these articles about the link between vaccines and autism. Mercury in a needle! Being injected into our precious baby! I’ll admit it, we got ourselves good and freaked out. But then we learned a bit more and realized just how ridiculous the whole facts vs. nonfacts controversy surrounding vaccines really is.
My 1st marriage will last forever!
HAHAHAHAHAHAHAHAHAHAHAHAHAHAHAHAHAHHAHAHA!!!!! HAHAHAHAHAA!!! HAHAHAHAHAHAHHAHAHA!!!!! Whew! All right then, moving on.
I want to become a counselor and help people!
When I enrolled in a master’s program with the goal in mind of becoming a licensed professional counselor, I really thought I had found what I wanted to be when I grew up. I learned a lot, but after a few semesters, I figured out that mental health was not the profession for me. 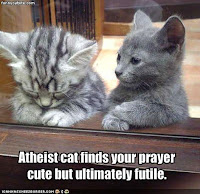 I will never be an atheist!
And yet here I sit, an unbeliever.


I will never put a LOLCat on my blog!
Doh! Actually, I think I've probably already messed this one up.
Blogging is dumb!
This isn’t really too far off from Mr. Stoll’s statement about the internet as a whole. I remember when I first started to run across people’s online journals, many of which were anonymous. I perused a few here and there and found it to be the whiniest bullshit I had ever read. I got it in my head that a bunch of people just writing about whatever the fuck they want to and putting it on the internet was a stupid idea. Then not too too long after that, my friend Tim created the individual blogs on the Loaded Gun Theory site, and lo and behold, I became a blogger.
So there's just a few of my mistakes for y'all to chew on. I wracked my brain trying to think of some more, but these are honestly the only halfway-interesting ones I could come up with, and that's stretching the definition of "interesting." For those mistakes that I'm unable to recall at the moment, hopefully I at least learned a lesson from them.