So here's how tired I was the other night. Henry was crying to be fed. It didn't wake me, but it woke Ash, so she nudged me and asked if I could get him and hand him to her. I apparently said "sure sweetie" then patted the pillow I was holding and handed that to her. I remember none of this.

Something I didn't have before

I realized that I have reached a point in my life where I actually have opinions about the placement of button snaps on baby clothing. All's I can say is yay for onesies.

So these are the answers to my own little FAQ, the most F'ly A'd Q's that we've received so far about having a new baby:


- Yes, the fact that "parent" has just been added to the list of roles that we play in this life can occasionally come crashing down like a big meteor of reality.

- Yes, diaper changing does have its own rewarding quality.

- Poop, pee, feed, sleep, and look around all wide-eyed at the world around him. That's about it.

- Not sure yet, but from what I can tell, he appears to have my chin at least.


- Anything that involves kicking and/or screaming because this kid can kick and scream like you wouldn't believe.


- It was dark green at first, but then it turned sort of a dark yellowish color. That's from the breastmilk.

- About 14 hours, and she did it all naturally. I must say, I have developed a profound new level of respect for her after watching her go through that. Really for any woman who gives birth. I have never seen anyone work so extremely hard and suffer so much for so long a period of time. After the months of pregnancy and then being with her through the labor and delivery, watching her go through so much to bring this little guy that we made into the world, I was overwhelmed with just how close and in love with her I felt after it was all over.
Let me clarify one point though: just because her labor was 14 hours, it doesn't mean that I have less respect for a woman whose labor was, say, 10 hours, or more respect for a woman whose labor was 25 hours. I've overheard a few of these pissing contest conversations, like executives comparing business cards. Christ, they say men are competitive.

- No, I'm not all freaked out now because I saw my wife give birth. There's this idea out there that some men who witness their partners give birth have difficulty seeing them as sexual beings afterwards, and can even be tramautized...yes, tramautized, a condition typically associated with witnessing a murder or spending time in a war zone. This is thought to be especially true if the guy really saw everything. Well, I really saw everything and my response to these guys, though it may be a little insensitive to whatever psychological shit they're dealing with, is that they need to stop pretending they're fucking a 17 year old virgin every time they have sex with their wives. For fuck's sake.

- Not sure yet. We listened to Morcheeba in the car on the way home, but the car always puts him to sleep, so I'm not sure if he heard any of it or not. He seemed to like the Bob Schneider that we played last night, though.

- Several hundred, at least, and quickly approaching the thousands. I shudder to think what I'd be paying for film. Thank dog for digital cameras.

- Yes, he's sprayed me. Three times so far, I think. You gotta get a towel on there quick after the diaper comes off.

Henry Nelson Holmes was born on October 21, 2005 at 9:59 PM. He weighed in at 7 pounds 7 ounces and measured 19 inches long. Many many more details to come, but for now, here's a few pictures of the little fella. 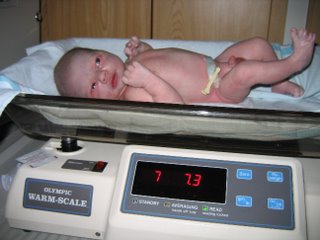 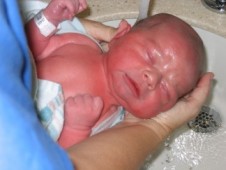 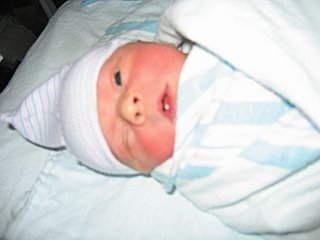 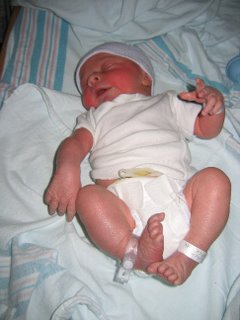