Posted by Unknown at 9:36 PM No comments:

What is up infidels!

So however the play may have gone last Saturday night, the thing that sticks out the most in my memory is not our show, but the after-show show put on by The Arab League. This here be them: 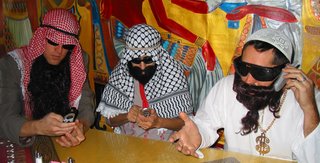 They come from the tiny island of Hiphopistan, where there is no oil, but plenty of beats. Before the show, they wandered through the crowd greeting all the guests (what is up, infidels!). It was like Arabian Disneyland, or an Arabian Renaissance fest. I dunno. It inspired lots of bad jokes (the Apple suicide bomber - he uses a JiPod....blogging about the Arab League is an act of JiBlog...yes, awful, I know, but sadly I can't take credit for either of those). Once on stage, it was like some kind of Middle Eastern Public Enemy show. I couldn't stop laughing. They kicked ass, don't get me wrong. I'd totally go see them again, if for nothing else just to witness that yes, this bizarreness is actually taking place in front of me.

Posted by Unknown at 9:08 PM No comments:

What a difference six months makes: 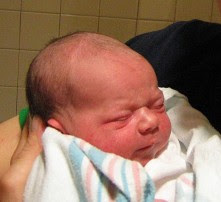 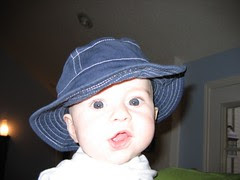 It's nuts to think that as soon as Henry was born, we were analyzing his features at a microscopical level to see who he looked like. I look at those pics now and he just looks sorta squished. And tired. And pissed. Definitely pissed.

In other news, The Empty Bowl opened last night. Things I can say about this particular opening night with absolute certainty:

- It went well. Very well in fact. Some might say great. There were a few imperfections, sure, but we really only threw those in to let the audience know that we were in fact human and not robot actors. It's a serious concern amongst Austin fringe theatergoers.

- I and my fellow cast members are very glad to have it behind us. We been stressin' yo.

- I'm glad the intense rehearsal period is over, as is The Ash, so's I can spend some time at home again. Being in a play is great, but so's being family guy.

And tonight's the opening night party, with some hip-hop group called The Arab League playing the post-play party. I'm curious to see these guys in action. Oh there will definitely be hipping, and there will most certainly be hopping.

Posted by Unknown at 9:01 PM No comments:

My personal fave amongst the publicity photos for The Empty Bowl: 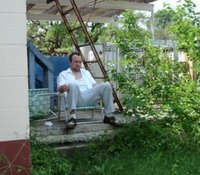 Yes, it's me (for those who don't know me). Yes, those are seersucker pants. They originally belonged to Grandfather Holmes.

And the Loaded Gun Theory site is now updated with all The Empty Bowl info. Enjoy!

Posted by Unknown at 8:59 PM No comments:

Ash keeps referring to our child as a genius. I'm sure this is common among parents, but it gets me to thinking, what if he is a genius? To which I respond, great. Just great. That's all I need. I already live with a detective/debate master. All I need on top of that is a little Einstein running around. I'll have to put a lock on my office door so I can go be dumb by myself when I need to.

Posted by Unknown at 8:57 PM No comments:

I've been really goddamned lucky in my theatrical, um, career (for lack of a better word). I've gotten myself involved with two very cool, very different companies. I've been able to get a lot of my stuff staged and put before actual audiences. Of people. I've been cast in some great plays and even been given some great roles and worked with some very talented people. Some plays were just fun, some required a bit of a deeper dive into myself. This latest play I'm in, from where I'm sitting, is the best of both worlds. A thought provoking piece and a meaty challenging role to boot. And as much fun as I know fluffy pieces of theater can be, I caught myself thinking today that after this, I never wanted to do fluff again.

But that doesn't mean I won't watch the shit out of it. Have you heard about this movie Snakes On A Plane?!?!?! Holy crap, not only did the internet uproar get them to keep that awesome title, they got a line for Samuel L. Jackson added to the film! It's one of those stories that makes you love the internet. Brandon, if you go see this movie without me, I'm setting some snakes loose in your Forester.

Posted by Unknown at 8:57 PM No comments:

The Soiling of the Bibs

Ya know, I really thought that negotiating gruel-like substances into the mouth of a squirmy little baby using nothing more than a spoon and whatever marksmanship I posess was going to be one of those parenting tasks that I just didn't like. But we've started incorporating a bit of it slowly, ever so slowly, into Henry's diet, and I'll be dadblamed, but it's working. And I'm enjoying it. I think the Ash and I hit upon a stroke of brilliance last night in our campaign. It just so happens we were having tomato soup, homemade by the Ash, modeled after that crack-laced tomato soup substance thing they have at La Madelaine, except with less butter and zero crack. With little dude focused intently on our every movement, me and the Mom fed each other spoonfuls of soup, the recipient gladly accepting the bite with a big smile of glee. After our little demo, little dude seems to have become something of a pro in the art of gruel ingestion.

Posted by Unknown at 8:56 PM No comments: