The Ewings Came In The Mail

For whatever reason, the people at the American Association of Retired Persons seem to think that my wife’s uncle, who passed away about four years ago, lives at our house. I know this because they send us their magazine every month and it’s got his name on it, right there above the address. Sometimes I flip through to see what the old folks are getting themselves into these days. Mostly, it just ends up in the recycling.

But the cover of this latest issue caught my eye. 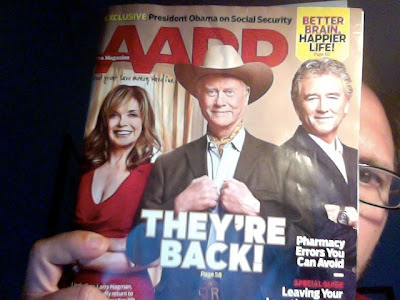 Yep, those are the people from Dallas smiling out at you from the page of this blog. Sue Ellen, J.R., and Bobby Ewing of the Southfork Ewings, they of the intrigues and the infidelities and the oil-soaked family drama. I guess they have real names, but who needs a real name when you're a Ewing? Apparently they’re doing a remake of the show, or to put it more accurately, a continuation that picks up decades after the old one left off, and it includes some of the original characters such as these three, as well as their children, now all grown up and being as shitty toward each other as their parents were back in the 70s and 80s. When I first heard about it, I was actually kind of surprised these actors were all still alive, but there they are. Hell, Sue Ellen’s even looking kinda good. Wuzzup, old lady?


My mom was the one who first told me about the new show, which is fitting since she was a huge fan of the original show back in the day. It was quite rare for her to miss an episode. In fact, one of her primary motivations for buying a VCR was so that she could record it anytime she wasn’t going to be able to catch it at airtime. She worked a lot, and when she wasn’t working, she was often running me to this or that activity, so this wasn’t uncommon. She pored over the instructions for how to set the timer to start and stop recording at the right time. If I was home, it was my job to make sure her shows found their way onto tape. I don’t remember if it was Dallas, Knots Landing, or Falcon Crest, but I once forgot to record one of her shows, and you can bet your ass I heard about it. Looking back, I can’t really blame her for getting mad. You work your ass off all day, you come home and all you want to do is kick back with your show, but your lazy kid couldn’t even be bothered to press a goddamn button? What the hell, young Holmes? Get with the program.

So that magazine up there’s been sitting on our coffee table for about the past week, and every time I walk past it, I get this weird twinge of nostalgia. At one point, I even caught myself devoting an entire thought to hoping the show does well. An entire thought! That caught me by surprise. I have absolutely no intention of watching the show, and the original was never really my thing - no talking cars, no Mr. T, no mystery-solving stuntmen - yet here I was hoping that it does well. Normally, I wouldn’t give this kind of thing a second thought, or if I did, I’d cheer for it to fail because I’m wired like that. But in this case, childhood memories overrode that and dosed me with the warm and fuzzies for a show I hardly ever actually sat down to watch.

But I guarantee I’ll be able to hum this theme song until the day I die.