I'm just gonna buy the kid his own camera

And I'll let him take tons of pictures like this:

Seriously, I love it. I know he almost certainly didn't mean to take this shot while he was snapping pics with the iPhone, but still, he ended up with an interesting composition. To me anyway. You may be looking at it and thinking "Yeah dude, that's uh, that's really great or whatever." Quit rolling your eyes. Shut up.

Anyway. Handing the camera over to the kids usually yields, well, usually a lot of blurry shots, often of crotches since kids are short. And pervy. But just as those googlemaps vans sometimes manage to grab some fantastic shots, a kid left alone long enough with the camera can sometimes make some cool accidental art. Or, you know, break your fucking camera.

--Posted from phone, so forgive typos or formatting weirdness. Thanks, you're the best.
Posted by Unknown at 11:04 AM 3 comments:

If the child sitting next to me was a figment of my imagination, then I would appear to an observer to be some guy sitting there blowing bubbles and talking to himself. Such sights are not unheard of or even surprising in Austin. This thought occurs to me as I sit there with the boy, and I almost tweet it, but then decide to save it for a post. But about what?

The boy, it turns out, is most likely not a figment. Various bills and messes and irretrievable hours of lost sleep attest to this. We are, the two of us, sitting on the stairs of the deck in the backyard of our house. I'm blowing bubbles and he's sticking his hand in the bubble juice, adding to the mess that he is making of himself. I swear he was mostly clean when we got home, but after digging for Elmo in the dirt of a freshly watered plant, he's caked in grime. It took him all of about 23 seconds to achieve this state. Not his record time, but respectable nonetheless.

This deck is one of my favorite places in the world, the very feature of the house that screamed "You must have me!" when we first laid eyes on this place. I saw visions of backyard grillfests, friends over for parties thrown for no reason at all, lazy afternoon beers, children running wild while grown folks sit around and talk grown folk talk. It's been host to all these things and then some, but with this ridiculous summer we're having, you can't be out here too much during the day. You have to wait until times like now when the sun is descending behind the trees and houses to our west. Then you can do things like sit on the stairs of the deck with a dirty baby boy and blow bubbles.

If I were a wiser man, I would spend more time being grateful for forgettable little moments like this.

So peep those images off to the right. Your other right. That way ->

Find any of that intriguing? At all? In the least?

Well here's the deal. Those images over there, along with a whole lot of others like them, tell a little story that I put up on DadCentric. It's told in two parts, which I have helpfully linked to down below. Go check 'em out, eh?

A Better Mousetrap - Part I

The Hamster And The Bear

The post you see in front of you is a surrender, a surrender by me to the irrefutable fact that I’m just not going to be able to make it happen. My brain just doesn’t have it in it. You see, a few nights ago, I wrote a post all about how my boys fight a lot, how they beat the hell out of each other sometimes, but how they can also be really sweet to each other, especially when it really matters. And I really liked this post. It felt good to write and good to read when I was done with it. It included a reference to midget MMA, the thoughts of a mourning fighting cock, a sweet little scene between my boys in one of their better moments, nice transitions. I just felt really good about it.

You probably know where this is going.

Long story short, thanks to the treachery of this insolent Macbook upon which I write, I lost the post. I closed my laptop, and instead of just easing back its battery suckage and leaving everything else intact, it decided to restart, and do away with all unsaved work. Fuck me, right?

So this morning, I attempted to recreate it. I had no illusions that I would like it as much as the lost original, but I thought I’d at least be able to come up with something post-worthy. I remembered the midget MMA bit, the crying fighting cock, etc. But again and again, as I tried to make it happen, it just wouldn’t. I couldn’t get past four lousy lines. And so I wimped out and wrote this instead, a post about a lost post that will hopefully convey some of the thoughts contained in the original.

Look at this picture: 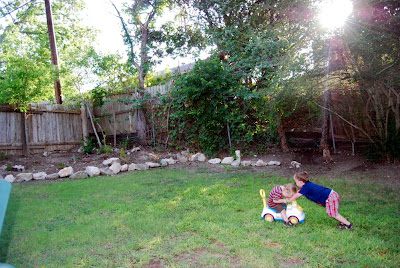 I don't know what it is about this picture, but for me, it has come to symbolize all the reasons there are to hope for a better world. It's true, my boys often beat the hell out of each other. And I know, I know, it's like some sort of law of nature that brothers are supposed to battle it out. But then there are moments like this where they feel nothing but joy in themselves and each other, where it's just the two of them in their little sibling bubble that no one else can enter.

A couple of weeks ago, the youngest one had a minor surgical procedure to help ease his breathing. Minor as it was, he didn't feel too great for a few days afterwards. At one point, we were sitting on the couch with him, trying to ease his suffering. He was in one of those states where all he could do was cry, and we were trying everything we could think of to help him, but to no avail. Big brother asked, "What's wrong with my baby?" This is what he calls him when he's in a nurturing mood: my baby. We told him that his baby wasn't feeling good. So he went and got his prized toy Lightning McQueen car, the one that he usually freaks out about if he sees it in his brother's grubby paws, and handed it over to his baby brother. The crying promptly stopped. True, it might have been out of shock that his older brother was actually letting him play with one of his favorite toys, but whatever. It was a sweet gesture, and it brought some measure of relief. It gives me hope that, even though these two will undoubtedly beat the crap out of each other more and more over the years, they'll still be there for each other when it counts.
Posted by Unknown at 10:00 AM 7 comments: