So we're selling our house, which means that I'm currently in the midst of house preparation hell. This weekend, me and my neighbor Mike with whom I share the back fence tore down said property marker and got to work on a new one. My buddy Andy came out for some of the fun too. That made for a sweaty backbreaking blistering weekend, I assure you. And that's just one of the projects we've got going on. I had this brief fear that Ashley hatched this plot with a real estate agent to trick me into agreeing to all these home improvement projects, and after they're all done, it'll be a great big "Just kidding! We're staying!" Maybe she even got Mike in on it. Maybe even Andy! That'd be fucked up.

So Saturday night, our friend Erin was over for dinner because she'd come over to help slap up some paint, and we got to talking about kid's memories, about how we carry lots of memories with us that we don't consciously remember. Like songs for instance. It's a well known fact that people grow up to have a certain knowledge or affinity for music that they heard repeatedly as babies, or even in the womb. Henry hears lots of music, but over the course of his first 9 months, I seem to have narrowed down a particular list of songs that are more guaranteed to get him to sleep. Thus, he may end up knowing the words to the following and have no idea why (and my apologies to future grown-up Henry for a few of these, but not all):

- "I'm So Lonesome I Could Cry" by Hank Williams
- "Blue Eyes Crying in the Rain" by Willie Nelson
- "Pancho and Lefty" by Townes Van Zandt
- "Margaritaville" by Jimmy Buffett (okay, apologies to Henry on this one, but dammit, it seems to knock him out about 80 - 90% of the time...I've really developed a love-hate relationship with this song, with the pendulum swinging strongly towards hate).
- "Desperado" by The Eagles (I'll shush you if you talk over this song)
- "Give My Love To Rose" by Johnny Cash
- "Summertime Rolls" by Jane's Addiction
- "Minerva" by the Deftones (this is a recent addition to the repertoire, since it was getting too full of country songs).

So yeah, there ya have it. There are others, but these seem to be the starting lineup. Between my awesome vocal stylings and a shot of breastmilk, that kid's out like a light. Except when he's not.

The words are dying

I would probably go nuts posting all the YouTube videos that I find interesting or funny, but this one demanded to be posted. Enjoy.

Firetrucks in my hood

So here's a sight that nobody wants to see out their front window. 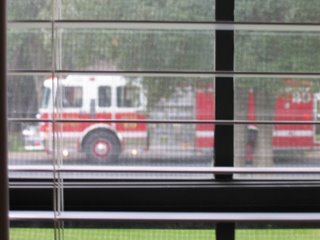 These guys were actually coming for the folks across the street. Apparently he hadn't put his coals all the way out after barbecuing, and a coal fell under his deck and set it on fire while he was gone. Lucky for them, The Ash was outside and smelled smoke.

Sometimes, I just don't get advertisers.

To me, this commercial seems to be saying "Hey buddy, feeling like a pussy? Then buy a Hummer so that you can become the exact stereotype that everybody thinks of when they think of Hummer buyers: guys with adequacy issues who buy Hummers to help them not to feel like pussies."

Then again, maybe I'm not their target demographic, especially given that I'm not all that taken with their 20mpg fuel efficiency rating.
Posted by Unknown at 12:35 PM No comments:

So I always wondered what I'd look like if I was teleported into comicbook land: 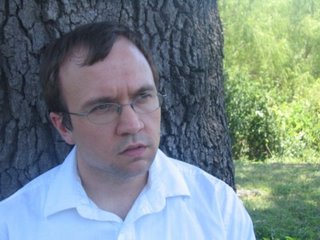 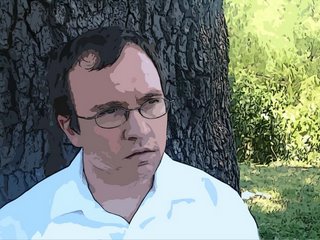 This is from an online comic that my friend Brandon and his partner Artie are currently working on. It doesn't really require much from me except to show up and make whatever motions and facial expressions I'm told to. There's a lot more pics just like this that have me pretty stoked to see the finished product.

Parenting For A Peaceful World

So I just finished a pretty amazing book. It's called Parenting For A Peaceful World, and it's by an Australian chap goes by the name of Robin Grille. I think I mentioned this in a previous post about ten years ago when I started reading it. Before you yawn off, I should tell you it's not exactly a parenting manual. It's more of a journey through the world's history through the lens of parenting and childhood, talking about the various stages of parenting through the ages and what life was like, not only for the children, but for the adults who grew up within those varied societies to become the next generation of parents, teachers, doctors, legislators, experts, and leaders. Long story short, we've gotten much better over the millennia, advancing from infanticidal barbarians to our current state where, although abuse does still happen, it's much less common and recognized as wrong and pretty much outlawed. The book succeeds, I think, in spelling out a pretty good cause and effect relationship between a society's more common parenting styles and its proclivity for violence or peace. To cite just one example, the generation that grew up to become Nazi Germany was raised during a time when the most popular German parenting manuals advised parents, and I shit you not, to refrain entirely from physical displays of affection and do whatever was necessary to establish rigid authority over the child, including such lovely methods as "physically perceptible admonitions" to bring baby's crying to an end (i can only imagine what that means), the use of metal jackets to enforce posture, and teaching self-denial to children by eating their favorite foods in front of them, but not giving them any. Hitler himself was made to count each blow out loud as his father administered them, and was frequently beaten unconscious. Stalin, Mao Tse-Tung, Saddam Hussein, basically every perpetrator of massive state-sponsored murder is known to have had an extremely violent childhood. It's pretty common knowledge these days that abused children become abusive adults, but pulling back for just a second and seeing what happens, what has happened, when abused children grow up and vie for power that is then handed to them by nations of people that also experienced abusive childhoods who are all too glad to give over authority to punitive rulers, well...let's just say it makes me curious about what the Bush household was like when George and Jeb were growing up.

Speaking of G.W., the book's got some pretty harsh words for the U.S. For example, in 1989, the UN General Assembly passed the Convention on the Rights of the Child, which stipulates, among other basic kid-related laws, that children may not be executed, jailed for life, or imprisoned with adult offenders. Sounds good, right? Every UN nation has ratified it except for the US and Somalia. We're in company with goddamn Somalia. The US must be like the big rich retarded kid at the UN. Not to mention the fact that we give WAY less maternity leave than many other nations, including many rather poor nations. Why are we always so goddamned backwards on this shit?

So that barely covers a tiny portion of the book's scope. The ultimate premise that it sets out to prove is a fairly simple one, that loving and empathetic parenting develops children who are more capable of love and empathy themselves, who grow into more fully-realized adults with no need or desire to choose violence, thus creating better societies and a better world. A simple formula, right? It's tempting at times to just jettison the whole thing, especially after listening to war coverage on the way home from work, and particularly because the book is just so damn optimistic in tone. This Grille guy really envisions a peaceful world, and in fact sees that as a fairly modest accomplishment, just a starting point for much greater things. The book was published in 2005, and he doesn't ignore the Iraq war, but even with that factored in, he still manages to see us moving towards peace, and I think he actually succeeds in laying out some pretty good reasons for hope. I guess I have to give him kudos for having that kind of audacity.

I think ultimately, it's a reminder that parenting, like any of the larger roles that we find ourselves called to, is work that's performed day to day, moment to moment, but whose scope is long term. The treatment of our ancestors when they were children shaped the world we grew up in and the parenting that we received, and the way we treat today's kids will have many results that we won't live to see.

To close, here's a neat quote:

"To look into some aspects of the future, we do not need projections by supercomputers. Much of the next millennium can be seen in how we care for our children today. Tomorrow's world may be influenced by science and technology, but more than anything, it is already taking shape in the bodies and minds of our children."
- Kofi Annan
Posted by Unknown at 12:31 PM No comments:

How the sling got slung

So checka check it out. The Ash has been working like mad as of late, staying up while the boys in the house sleep, working weekends, etc, and her online store is now open. My friends, I present to you Little Pepper Pouches! (ahem, dot com). 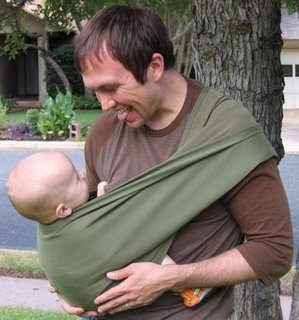 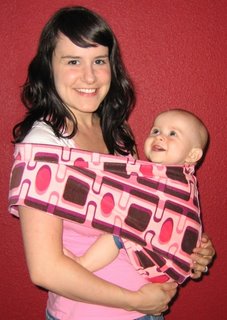 So just like the website says, the whole thing came about because we wanted to do the whole sling thing, but were having a hell of a time finding any that we really dug on in which to enslingen our little dude. It seems like most of them out there are either A) impossible to use, B) uncomfortable, C) supermegauglyboring, or D) a painful combination of the above. So Ash hopped on the sewing machine and LPP was born. Yes, that's me in the picture, yes that's Ash in the other picture, and yes that's the baby Henry in both pictures.