A couple of weeks ago, I contributed a guest-post to a series about doing crazy shit hosted by Brian over at The Cheek of God. The story I told there reminded me of yet another time where I pretended to be something that I was not for no real reason other than to do it. I almost hesitated to post it for fear nobody will ever trust me again, but, you know, screw it. So without further ado...

It was Friday night. I had made it this far, five and a half days since the previous Sunday afternoon when I’d first started the challenge. The idea had been conceived the week before and quickly codified into a wager. It had been Champ’s idea, most likely borne out of his annoyance with me.

“I bet you can’t talk with that stupid accent for a whole week.” he’d said.

“Aw yeh?” I said. Or maybe I said “Oh rayally?” Or worse, “Betcha ah can, mate.” I don’t remember my exact words, only that I made it clear that this kid was game.

The accent in question was a rather poor Australian that myself and a few of the other kids on the camp staff had taken to using for no apparent reason. No wait, there was a reason: we figured out that it annoyed Champ.

Champ. That was his name. From his short stature to his dark hair to his jacked-up pickup to his resentment of having his authority disrespected or disparaged in any way whatsoever, he was every bit the Napoleonic figure. Still, I didn’t totally hate him. And looking back, I confess I feel just a twinge of sympathy that he had to be in charge of a bunch of asshole teenagers.

But hey, nobody was forcing him.

Somehow, I ended up as one of the main figures in this game of accent annoyance, so it was to me that Champ delivered his wager. “I bet you can’t.” he’d said. Bitch, you just lost a bet.

It ended up being me and one other kid in on the bet, another guy my age whose real name totally escapes me now, but who we all called Fievel because he wore a hat just like the movie mouse of the same name.  They had the same hat and everything. The point of the bet was for the two of us to speak in those ridiculous Australian accents, 24 hours a day, for an entire week. Since there was a new batch of kids in camp every week, the bet started when the first group rolled in, and ended when the last troop rolled out. For the kids in attendance that week, their entire experience of Fievel and I would be as guys speaking with funny accents. So we decided that rather than just speaking like Australians, we would just go on and be Australians. I mean really, Australia vs. Texas - how different are they? We looked at a map and figured out what town we were from, dreamed up a bit of backstory as to why we were in the States. Conveniently enough, Fievel even had an Australian scout uniform. Our story was air-tight. We were good to go.

Did I mention this was a boy scout camp? Yeah. A scout is trustworthy.

We made it through the entire week with nary a slipup. Looking back, I can’t say for certain that we had all of the adults fooled, but most of the boys seemed to buy it. If any didn’t, they kept their mouths shut. The rest of the staff seemed to have our back when it came to verifying out story. Fievel and I briefed each other throughout the week re-garding any pieces of our fictional past that we had told anyone, just so that our lies would all add up into one great glorious mound of truth.

FIEVEL: So ah tauld thees keeds thees morning that our mum had a pet koala beh when we lived in Australia.

FIEVEL: Yeh. Sed we hed to laeve it at the koala beh pound when we moved to Texees.

HOLMES: Ah'll mike a note of eet. Oh, before ah forget, ah told some keeds that you lost a surfing competition to an Aboriginine keed named Terrence.

HOLMES: Because you're a terrible surfer, stewpeed.

At one point, I got chewed out by one of my supervisors for something that wasn’t my fault, and had to chew back with the accent in place. I can now say from experience that expressing your righteous indignation in a voice that is not quite your own has a way of pulling you out of yourself. I’m not sure that Travis from Houston would have responded to a misplaced ass-chewing with quite so much volume, but Travis from Perth, Australia had no problem yelling back at his superiors, and didn’t really care if he was making a scene. Because the whole week was already a series of scenes, why not have one where the Australian guy gets pissed off? I hear those people have anger issues. They're descended from criminals, you know.

Friday night of every week was the closing campfire, our little way of saying thanks and so long to the people that had spent the week with us. The Sunday night opening campfires had a way of being subdued, what with all these boys being away from the comforts of home, some of them for the first time. But after a week in the woods, closing campfires could be counted on to be rowdy affairs. But that particular week, I felt a bit of melancholy. I had essentially spent the week lying to these kids and their adult leaders for no real reason. Yes, this story wouldn’t be complete if it didn’t have that word in it: lying. It had been fun, but now that I was about to send these kids back into civilization with false information in their heads, my conscience was making a pest of itself.

But then the campfire ended and whatever guilt I felt subsided along with its flames. The troops rolled out the next morning. Fievel and I won our bet, so Champ held up his end of the bargain by taking us out for pizza. We ordered two larges topped with pepperoni and extra Champ-is-a-loser sauce.

I went back to work at camp again the next summer. One week, some kid whose face I didn’t recognize walked up to me and asked, “What happened to your accent?” It was a shitty feeling. I made up something about how it had faded over time, been in Texas for so long, blah blah blah. I responded to a question about one lie with another lie. One fiction propping up another.

So with that, my career as Andy Kaufman came to an end.
Posted by Unknown at 1:53 PM 2 comments:

Email ThisBlogThis!Share to TwitterShare to FacebookShare to Pinterest
Labels: acting, boy scouts, stories of our lives

I am currently in posession of two sets of tickets:

--Posted from phone, so forgive typos or formatting weirdness. Thanks, you're the best.

Out of Blog Reply

Hello, and thank you for stopping by to visit me. I'm currently out of the blog, but if you would like to reach me, you may find me at each of the following locations:

First, my latest comic offering is up at DadCentric. To get there, click on my balls: 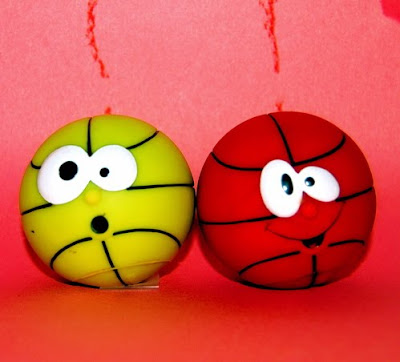 Secondly, I contributed to Brian's series on craziness over at The Cheek of God. To get there, click on my face: 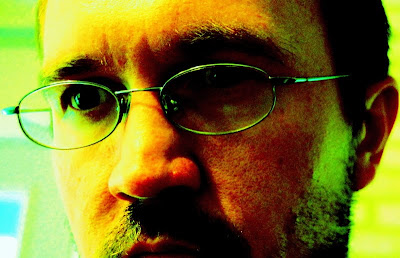 I shall return at an undisclosed date some time in the near future. I appreciate your patience and continued support.
Posted by Unknown at 9:25 PM 2 comments:

Aim for the head

I posted the other day about setting kids loose with cameras. Here's another example, fresh from our trip to Ft. Worth to visit my cuz Kelly and her husband-man Alan, of our 3 year old turned loose with the camera. Note the slow but steady progression: 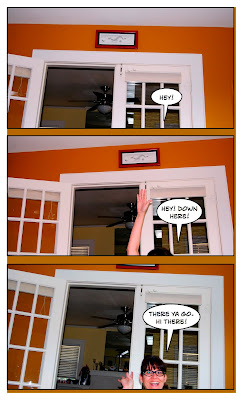 Don't Leave Your Undies In The Street

My city is hilly and my hood’s among its hilliest. The prevalence of split-levels along our streets is no accident. Take a walk from my house and it’s something like exercise; a bike ride is exactly like it. Thus, the purchase of a new jogging stroller wasn’t just a pricey way of carting the boys around. My wife brought it home yesterday and the boys couldn’t stay off of it. After dinner, we headed out.

We were on the last leg of our trek when my wife handed over the reins to me. We were at the top of a hill about to go down when the boy spoke. 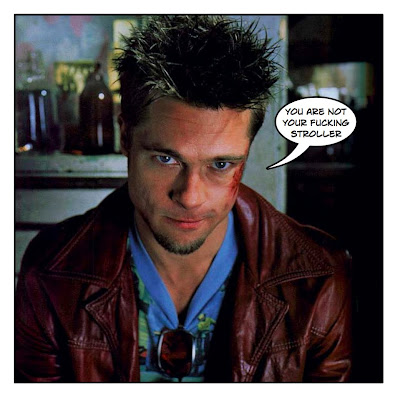 “How will you stop?”

I had Tyler Durden in the stroller. Quit trying to control everything and just let go.

And so I did. Gravity instantly took over, pulling the stroller away from my hands and urging it downhill, faster and faster. The boys screamed, thrilled by the sensation of moving under the control of no power but physics. Ashley and I watched the stroller careening away from us.

At the bottom of the hill, I could see a car parked at the curb in front of our neighbor’s house. Our stroller was gaining speed and appeared to be on a collision course. Inside, its little passengers cried out their mad joy for all to hear.

She pulled her iPhone from her pocket and scrolled across a few icon-filled pages until she found the teleporter app she had downloaded the week before. The free version.

“It’s okay. Not sure I want to pay for it, though. It’s got some problems.”

She tapped a few keys on the screen and disappeared. From where she had been standing, bits of fabric fell to the asphalt. She reappeared at the bottom of the hill directly in front of the parked car, just in time to catch the stroller that I had just set free not twenty seconds ago. It was very smooth, very tai-chi, the way she absorbed the motion of the speeding stroller and redirected it. I picked up the pieces of fabric from the street and strolled down the hill.

“Nice catch,” I said. The boys were laughing, still giddy from the ride. I handed her bra and panties over to her

“Oh dammit,” she said, taking them from me. “I wish they’d fix that stupid bug.”