So it's become painfully obvious to me that the blogging has fallen off a bit over the past few months. I've written it off time and again to simply being busy, having more pressing priorities, simply not having the time or energy...all of which are true to an extent. But the fact is, those things will probably always be true. Such is this thing called life.

But the other fact is that I miss it. Not blogging so much, but the writing. I started blogging in the first place not so much to blog, but to write. I guess that implies a distinction between the two, but whatever. Point is, I'm in need of a little kick in the ass. Not in the balls, mind you, as such a blow would not provide the motivation I'm looking for. No, what I need is a good old fashioned writing exercise, something that will provide me with enough fodder to get going and will make sure I do it every day.

And what better fodder than one's own life and the people who have walked through it, leaving behind little traces of themselves by which they may be remembered? With that in mind, I've decided to turn the pages of my life's script back to the first few pages where the cast is listed and start remembering each character one by one. It's a project called x365 created by a guy named Dan Waber, and I've been wanting to do it for some time now. I thought about waiting until my birthday to start, but dammit, that's then and now is now. So starting tomorrow, and going for the next year, I'll be writing about one person per day, people who I've met, known, liked, disliked, friends, enemies, frenemies, etc. That's 365 posts about 365 people who have made some kind of an impression in my life. It's a daunting thought. Have I known that many people? Surely I have. So can I remember that many? Guess I'll find out.

Email ThisBlogThis!Share to TwitterShare to FacebookShare to Pinterest
Labels: x365

I don't mean to come off as defensive, but what was that look on your face this morning? You know the one I'm talking about. You'll recall, I was the handsome fellow coming out of his house, 100 pound baby-loaded carseat in one hand, travel mug in the other, diaper bag over my shoulder, toddler out in front heading for the vehicle that you undoubtedly heard him insisting was "his car." And of course, you'll remember how I used the baby's carseat to prop the screen door open while I locked the front door, after which I chased down the elder child. Don't try to tell me you don't remember. The human brain is incapable of simply forgetting such images of controlled chaos. Perhaps you also noticed that one of my arms is slightly longer than the other due to its being slowly wrenched out of socket by repeated carries of aforementioned carseat. I would switch arms more often, but the morning routine has to be completed a certain way, lest chaos ensue. And you wouldn't want that, would you? Or would you? I'm not so sure I like the cut of your jib, Neighborhood Power Walker Guy.

Ah, so you do remember. Good. Now we're getting somewhere.

So answer me then, what was that look all about? Don't act like you don't know what I mean. It belittles us both. You were walking by at a vigorous speed in a manner which closely approximated athleticism. You looked in my direction, assessed my situation, at which point you made eye contact, squinted, smiled, and then looked away. Look, assess, squint, smile. What the hell was that all about?!?!

Seriously NPWG, I don't mean to come off as some kind of over-analyzing psychopath, but what did you intend to convey with that whole routine? What thoughts brimmed behind those beady squinted eyes? And I don't want to hear any of this noise about how you were just trying to keep your heart rate up. I know a look when I see one, and I'm telling you NPWG, that was a look. You gave yourself away with the squint.

Oh come off it! Quit acting so FUCKING INNOCENT!

Cordially,
Your Neighbor
Posted by Unknown at 9:26 PM 6 comments: 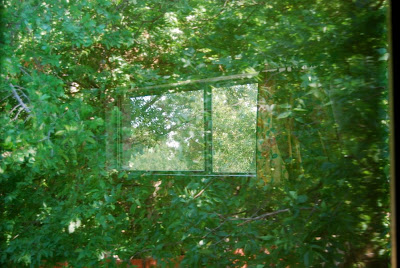 The reflection of one bedroom window in another created this nifty little illusion, a window to an alternative universe just hanging there in the trees.
Posted by Unknown at 3:19 PM 3 comments:

This year, Father's Day came on a weeknight

Let it never be said that The Holmes fails to find enjoyment in such good wholesome activities as running through a water sprinkler, scaling monkey bars, repeatedly pushing toy trucks down stairs, or any other such inner-child-embracing-hey-what-a-good-dad tomfoolery. I can run with the toddlers with the best of 'em, and I'll fight any man who says otherwise*.

But here lately, I've been craving some o'that non-wholesome explicitly-adult no-kids-allowed kind of fun. And thankfully, an opportunity for just that brand of leisure time came in the form of news from my friend Shayne aka Hip-Hop Show buddy, so called because he's, ya know, the buddy with whom I go to hip-hop shows. Or used to, anyway. It had been a while since I'd made my way to a show of any genre, so long in fact that when somebody asked me the other day who I saw last, I had to think for a few minutes, and I'm still not sure I gave 'em the right answer.

But then last week, the news came something like this:

Damn, a concert on a school night. A Monday, no less. That could make for a rather sleepy Tuesday. But as a very wise motherfucker once said, sometimes you gotta suffer for your fun.

The Ash must've sensed I was in need of a night out, because as soon as I told her about it, she blurted "You should go! Yes! GO! I'll watch the midgets!"

It felt damn good to get out and get a bit loose. Aceyalone was the main attraction for me. He's been a favorite of mine since college when I discovered his "Book of Human Language" album, a collection of tracks that opened my ears to just how amazing hip-hop could really be. And while I hadn't listened to much Dilated Peoples before, I'm definitely a fan now. And you know, you can call me immature, but I get a real kick out of joining in the kind of profanity-laden call-and-response routines that you can only find at concerts like this. Of course when I was younger and first started going to shows, I was much too earnest for any of that silliness: 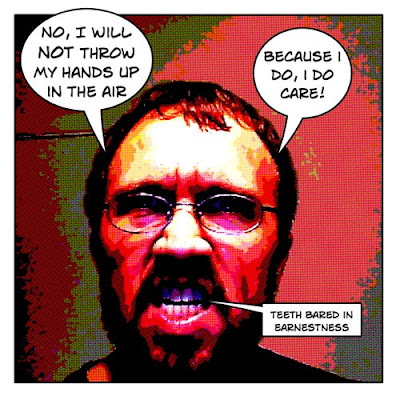 Could it be that as I've gotten older, I've gotten better at having fun? Or that perhaps I've become a bigger dork? Or do the two go hand in hand?

By the time we left, Shayne and I were both a little hoarse and we smelled like, well, like a hip-hop show. Define that as you will. Downtown was oddly crowded for a Monday night, but we found the car no problem thanks to Shayne being all go-go-gadget foresight and typing our parking spot into his Bwackbewwy.

I only got a few hours of sleep, but I felt great this morning. Even as I type this, I have a pleasantly loose feeling in my normally tight shoulders. I guess a little hip-hop was just what I needed to knock my shit back into alignment

*Metaphorically speaking, of course.
Posted by Unknown at 10:01 PM 8 comments:

Today after work, I went over to the gym in the next building that's free for all of the local cube dwellers. When I came back to the office, I had my headphones in my ears with Bad Religion blaring way too loud. They've been doing a lot of construction on my floor lately, including the removal of a great many walls, leaving behind a huge open area that will probably house even more cubes in the days to come. I was walking through this giant open area with my music going, and I suddenly had this incredibly clear vision of a moshpit full of my coworkers right there in the middle of the office floor, all of them dressed just as they do on any normal workday. It lasted for all of a second and then it was gone. Even the volume of the music seemed slightly lower as I walked back to my desk.

I know I mentioned a couple of posts back that it'd be nice to live in a kinder world, and it would. But I also like the idea of a world where moshpits occasionally break out in the middle of cube farms.
Posted by Unknown at 9:42 PM 3 comments: